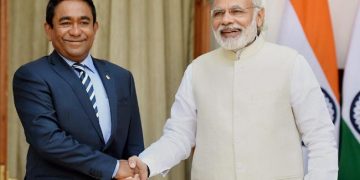 Maldivian President appeals to his countrymen not to antagonize India

Maldivian President appeals to his countrymen not to antagonize India Colombo, December 24 (newsin.asia): The Maldivian President Abdulla Yameen has appealed to his countrymen, especially the media, not to antagonize India as it is the “closest friend and ally” of the Maldives.

Speaking in an Atoll he was visiting during the day, Yameen also said that the Maldives is working on a Free Trade Agreement (FTA) with India.

A statement issued by the President’s Office said: “While appealing for restraint in criticism and asking not to engage in negativity towards India, especially in the media, President Abdulla Yameen Abdul Gayoom reaffirmed that India is the Maldives’ closest friend and ally.”

“President Yameen reiterated that his Administration would never entertain negative sentiments towards India, and highlighted that Indian assistance formed an invaluable contribution to the Maldives,” the statement added.

Yameen further said that the government is currently working towards a Free Trade Agreement between the Maldives and India.

The President said that Maldives and India have very close and long standing relations at the government to government and also people to people level with a number of Maldivian students studying in India and a number of them going for medical treatment to India. In turn, many Indians are working in the Maldives.

He castigated the “small group” in the opposition and the local and  international media who have tried to create a rift between the Maldives and India.

Touching on the recent Free Trade agreement between the Maldives and China, Yameen stated that it would bring several opportunities to the country. But the agreement will have no impact on diplomatic or political relations with any other country as it is purely commercial in nature, he underlined.

The Presidential statement comes in the wake of displeasure expressed by the envoys of UK, Germany and US about the way three elected opposition party councilors of a local body were summarily suspended for having a meeting with the Indian Ambassador Akhilesh Mishra on December 11  without  taking prior permission from the government in Male. The suspended councilors were from the opposition Maldivian Democratic Party (MDP).

A circular issued immediate after the dinner meeting with Mishra said that foreign affairs is the prerogative of the central government in Male and that no councilor could meet foreign diplomats without prior permission.

Such unauthorized meetings would confuse foreign policy and weaken the “unitary” constitution of the Maldives, the circular pointed out.

But India and the Western countries felt that this prohibition is unwarranted because envoys often have to meet officials and elected persons as part of their duty and such meetings are normally allowed by most countries.

While the envoys of Britain, US and German tweeted disapproval of the Maldivian governments action calling it yet another instance of the undemocratic ways of the current Maldivian regime, India preferred to follow quiet diplomacy rather than bullhorn diplomacy.

India merely said that its Ambassador in Male was engaging the host government on the issue. Indian Spokesman Raveesh Kumar took pains to emphasize that India and the Maldives have  had long and close ties and hoped that the Maldives would stay committed to its “India-First” policy.

On the controversial Free Trade Agreement (FTA) between the Maldives and China, Kumar said that the government had not yet studied the document and that it would be premature to comment on it.

However, New Delhi was astounded when the FTA was signed with China. Maldives had reportedly given an undertaking that it would sign an FTA with India first.