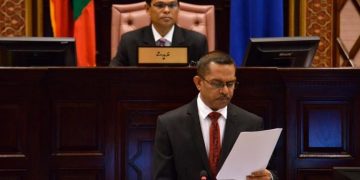 Male, February 4 (Avas): The long serving Secretary General of the Maldivian parliament, Ahmed Mohamed, suddenly announced his resignation on Sunday, amid the ongoing political standoff in the country.

He confirmed his resignation to Avas but refused to comment the reasons behind his sudden decision.

However, earlier, after the court order to release top opposition leaders, parliament Secretary General Ahmed Mohamed had told AVAS that there was nothing preventing the dozen disqualified lawmakers from attending parliament sittings following their reinstatement by the order of the Supreme Court on Thursday.

Meanwhile, the parliament session due on Monday was indefinitely postponed and two sacked Members of Parliament, Abdulla Sinan and Ahmed Ilham, who had been reinstated by the Supreme Court, were arrested.

Reports said that the military has surrounded parliament.

The first sitting for 2018 was scheduled for Monday and was due to be addressed by President Abdulla Yameen.

More than two days after the Supreme Court ordered the immediate release of as many as nine political prisoners, government has thus far refused to comply.

The court had also annulled its anti-defection ruling and ordered the country’s electoral watchdog to re-instate the dozen government lawmakers disqualified over the ruling.

The Supreme Court said the anti-defection ruling was issued as a temporary solution to the constitutional dispute case filed by the state but insisted that the relevant authorities have failed to bring to effect an anti-defection law specified in the ruling.

The reinstatement of the 12 lawmakers disqualified by the country’s elections commission would mean that the united opposition would now have parliament majority which has the power to impeach the President.

The Criminal Court had however, later revoked their arrest warrants.

The duo Abdulla Sinan and Ahmed Ilham were among the dozen former government lawmakers disqualified by the country’s electoral watchdog over the Supreme Court’s anti-defection ruling.

The country’s top however, on Thursday had annulled its ruling and ordered the reinstatement of the dozen lawmakers.