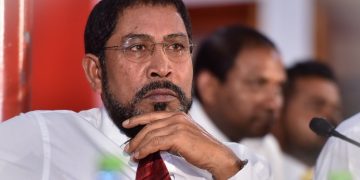 Male, January 31 (newsin.asia): The Maldivian Tourism Ministry has said that Villa Shipping and the Villa Group of resorts owned by the opposition Jumhoory Party leader Gasim Ibrahim owe the government US$ 200 million in overdue taxes and other levies, despite repeated official and unofficial reminders.

The Ministry said in a press release on Wednesday that if the payment is not made, the license for procuring liquor, which was suspended first and then restored for a period of 14 days, will be suspended again.

This warning was  directed to tour operators who deal with the Villa Group.

The government further said that despite the freezing of the ban accounts of five Villa Group companies, the latter are continuing to do their businesses from abroad including Germany where Ibrahim is presently living.

The Villa Group however told the media in Male that there are no outstanding dues.

In 2017 the government had charged Gasim of bribing members of the Maldivian parliament to overthrow the lawfully constituted government of the country only to evade taxes and other dues. The dues stemmed from the agreements by which he had taken islands and lagoons to run his resorts.

Ibrahim was convicted and sentenced to three years in prison. However, he applied for leave to go to Singapore for advanced medical treatment not locally available, and was allowed to go. But instead of coming back to complete his sentence, he went to Germany, where he presently resides.

(The featured picture at the top is that of Gasim Ibrahim, owner of Villa Resorts and Shipping and leader of the opposition Jumhoory Party)