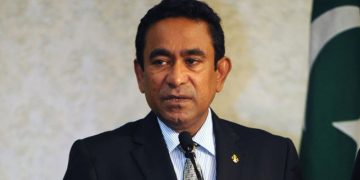 Male, January 28 (newsin.asia): The Joint Opposition on Sunday petitioned the Maldives Supreme Court to temporarily remove President Abdulla Yameen from the Office of the Presidency, a press release from the Maldivian Democratic Party (MDP) said.

The petition, signed by all the opposition leaders – former President Maumoon Abdul Gayoom, former President Mohamed Nasheed, Hon. Gasim Ibrahim and Deputy Leader of Adhaalath Party, Uz Ali Zahir, – asked the Supreme Court to rule to that President Yameen has broken the law and is unfit for office.

The Opposition seeks to remove President Yameen from office for:

1. unprecedented corruption, including unjust enrichment from appropriation of state properties and funds for personal benefit, for the benefit of his family and political associates;
2. the violation on the fundamental and Constitutional freedoms of the Maldivian people, including enacting legislation to encroach on the rights of the people;
3. enactment of legislation and ratification of laws in violation of letter and the spirit of the Constitution thereby encroaching the sovereignty and territorial integrity of Maldives;
4. failure to implement the provisions of the Constitution and the law, uphold rule of law, check and balance, oversight and accountability; including interfering with the lawful functioning of Parliament, and independent commissions.
The Petition asserts that the Auditor General, Prosecutor General, Anti- Corruption Commission and the Maldives Police Service under the Minister of Home Affairs, who are nominated and appointed by the President, have failed to impartially and without fear, stop President Yameen from appropriating State funds and properties.

In such an instance, it is the constitutional duty of the judiciary to uphold the Constitution and rule of law, protect and safeguard Maldives’ territorial integrity, defend and uphold rights and freedoms of the people of the Maldives, and to ensure the President discharges his duties and functions in accordance with the Constitution and laws.

The petition also asks the Supreme Court to establish a Special Ad-hoc Committee in order to investigate, formulate and submit an investigation report to the Supreme Court regarding the allegations of corruption against President Yameen and hold him accountable under Article 127 of the Constitution.

The Joint Opposition petitioned the Supreme Court as the Parliament, which has the power to remove a President from office, has ceased to function since President Yameen ordered the military to storm the legislature.

(The featured image at the top shows President Abdulla Yameen)