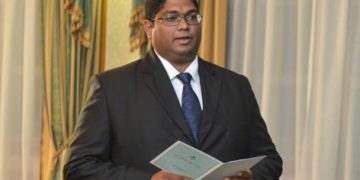 by Editor
in Around South Asia, Around The World, Maldives, Top Story
Reading Time: 3min read
1 0 Male, February 2 (newsin.asia): The Maldives’ Attorney General Mohamed Anil told the media here on Thursday that the government is currently working to “vet and clarify” the Supreme Court’s order to immediately release from prison all top leaders of the opposition including former President Mohamed Nasheed, and also to nullify the sacking of 12 parliamentarians for floor crossing.

Anil said that the Administration would work to “engage and consult with the Supreme Court, in order to comply with the ruling, in line with proper procedure and the rule of law.”

Acccording to the office of the Maldivian President Abdulla Yameen, the Defense Minister Adam Shareef called upon the Maldivian people to put on a united front, and work together with patience to maintain the country’s peace and stability, uphold the country’s laws, and urged all to cooperate with the law enforcement agencies in ensuring the safety of all Maldivians.

The Defense Minister further reiterated that the Administration always puts the safety of the country and its people first.

The Administration will continue to work towards strengthening the Maldives’ democratic system, and follow the administration’s developmental policies he said.

According to the local media, the Attorney General Anil stated  that Ahmed Areef has been relieved from his post as President Yameen’s repeated attempts to contact the Police commissioner had failed.

Meanwhile, the President’s Office called for applications for membership of the Elections Commission. On January 31, the chief of the commission, Ahmed Sulaiman,had resigned. The reasons for his resignation were not revealed to the media.

The ruling said all political prisoners must be released as the trials against them violated the Maldives’ Constitution and international law. The ruling also stated that political pressure was applied on the prosecutors and the courts during these trials.

The Supreme Court further annulled the previous controversial ‘anti-defection’ ruling of July 2017, thus immediately reinstating 12 opposition members of parliament. The restoration of the 12 MPs gives the opposition alliance a clear majority in the Parliament.

The rulings have been posted on the Supreme Court website.

The opposition alliance called on the security forces to uphold the Constitution, respect the rule of law, and serve the Maldivian people.

The United Nations Working Group on Arbitrary Detention had ruled that President Nasheed’s and Colonel Nazim’s detentions are unlawful under international law. The international community and other observers have widely condemned the highly politicised charges against Hon. Qasim Ibrahim, Sheikh Imran Abdulla, MP Faris Maumoon and other political prisoners.