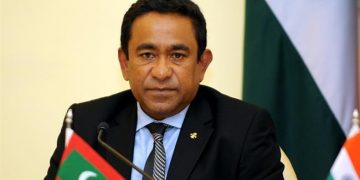 Reacting to Nasheed’s charge against the Abdulla Yameen government that it is facilitating the spread of radical Islam with a terrorist component in the Maldives, a government statement said: “It is certainly disappointing that false allegations and numbers are thrown at the Maldives, and its people in a manner which can create misunderstandings about the real Maldives, its people and their religious beliefs, in an effort to compromise and curb the hard work of the Maldivians in their journey to attain a better and prosperous life for themselves and their children.”

“While the Government wishes to reassure the international community and our guests from across the globe,that counter terrorism measures are our top priority, the Government also wishes to communicate its concerns about the amplification of the threat of terrorism in the Maldives for personal political benefit.”

“We also wish to assure that although there is no immediate threat of a terror attack in the Maldives, the Government will not ease on any efforts of monitoring and assessing threat levels, while taking appropriate actions where necessary.”

“In today’s world, no country big or small is immune from the actions of terrorists. No country can assure the safety of its shores from the threats of terrorism. Maldives being a tourist destination, will not relent in our efforts to ensure the safety and security of our people and the many visitors we host.”

‘We note with regret that a former Head of State, who resigned of his free will, and an active politician who is serving a sentence for arbitrary detention and holding of a sitting judge, is misusing the international media to spread fabricated facts and statements in the hope of gaining personal political benefit.”

In response to Nasheed’s criticism that the Yameen region is selling the sovereignty of the Maldives to China, the statement said that the Maldives is opening the economy to encourage free trade, with a mindset to compete in today’s global markets.”

“This administration came into office with the mandate for economic development and a more prosperous future for its people.  We have embarked on a journey to make the Maldivian economy more attractive to foreign investors and to organize ourselves to be better suited to compete in the international economic race,” it added.

“In this effort, Maldives has formulated new policies, enacted legislation, entered into agreements and also amended its Constitution in order to remove barriers to free and competitive trade, and adopt more conducive policies. We are seeing positive outcomes of these changes, and the Government notes that the Maldives is now one of the most promising destinations for investment and trade in this region,” the statement said.

In answer to the charge that the Maldivian government headed by Yameen will rig the Presidential election this year, the statement said: “The Government of the Maldives wishes to state that it has made and will continue to make every effort to ensure that the elections held in the Maldives are free and fair.”

“We would like to note that the Local Council Elections held last year was the last national level elections held and was endorsed and its results accepted by all political parties and international observers alike.”

“We are working continuously with international partners and would like to highlight that the Government will continue these partnerships and ensure that the upcoming Presidential elections will be transparent, fair, and upholds international standards,” the statement said.