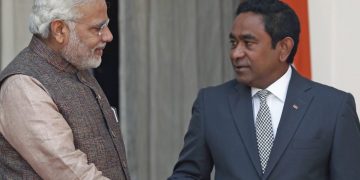 India's Prime Minister Narendra Modi (L) shakes hands with Maldives President Abdulla Yameen before the start of their bilateral meeting in New Delhi May 27, 2014. Modi was sworn in as India's prime minister in an elaborate ceremony at New Delhi's resplendent presidential palace on Monday, after a sweeping election victory that ended two terms of rule by the Nehru-Gandhi dynasty. REUTERS/Adnan Abidi (INDIA - Tags: POLITICS) - RTR3R0IM

Chandigarh, January 8 (Tribune India): The Maldivian Ambassador to India, Ahmed Mohammad, has criticized Indian Prime Minister Narendra Modi for cancelling the 2015 state visit to the Maldives and complained that India was moving too slowly in regard to its economic projects in the Maldives, forcing the Indian Ocean country to respond to China’s offer to move on such matters speedily.

In an interview with Tribune India about Indo-Maldives relations, the Ambassador Ahmed Mohammad spoke about the FreeTrade Agareement (FTA) with China and said that  China wanted a “quick FTA” which prompted the Maldives to engage easily with China.

The country’s first FTA was rushed through parliament in November 2017. The government says it will open up the world’s largest consumer market for tariff-free fish exports, while the Maldives committed to waive import duties for Chinese goods.

Mohammad said that an FTA with India was being discussed, but remarked that things were moving slowly.

“There are certain things that need to move faster [from India’s side], including FTA. On infrastructure developments, we have requests with India pending since the 2014 visit of President [Abdulla] Yameen. There are requests for which we need speedier processing,” he said.

Speaking about the state visit of Modi that was cancelled following the arrest of opposition leader and former President Mohamed Nasheed, Mohamed said that the cancellation did not bode well.

“We have not been told that PM Modi’s visit did not happen because of that reason [Nasheed’s arrest and the protests that followed]. It would have been better for the ‘Neighbourhood First’ policy if PM Modi had visited us,” he said.