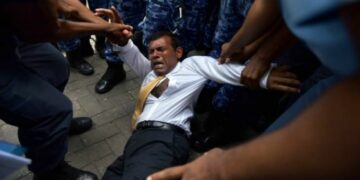 Colombo, May 8: The Maldives, which is an Indian Ocean archipelago, is a tiny country of only 530,000 people. Its politics is dominated by a few elite families, many of whom are related to each other. Yet, it is intensely faction-ridden and violence-prone, to boot.

Added to the combustible mixture is Islamic radicalism. According to the US State Department, an estimated 200 Maldivians, were fighting in Syria and Iraq in 2019, making their country the world’s second largest supplier of foreign fighters per capita, after Tunisia.

The latest in a long of series of violent political incidents was the blast which occurred on Thursday May 6 at the capital Male. At 8.23 pm, a non-military Improvised Explosive Device (IED) fixed to a motorbike parked near parliament Speaker Mohamed Nasheed’s car, went off, critically injuring him and three others including a bodyguard.

Over the weekend, as Nasheed was undergoing multiple operations at the ADK hospital to remove shrapnel from the head, chest and other parts of his body, the police said that they had identified the two arrested suspects as Thahmeen Ahmed (32) and Mujaz Ahmed (21). But the main suspect, the man who triggered the blast, was still at large, though the local media said that he was arrested on Sunday and even published a picture of him being led away by the police from his flat in Male.

The Head of the Crime Investigation Department, Assistant Commissioner of Police Mohamed Riyaz said both Thahmeen and Mujaz have past crime records. While Mujaz is suspected to be directly linked with the person who detonated the IED, Thahmeen is the owner of the motorcycle to which the IED had been strapped.

The Commissioner of Police, Mohamed Hameed, said the two suspects belonged to a “dangerous extremist ideology” and would not hesitate to kill. He did not elaborate in the absence of precise information.

The police released three images of the main suspect taken from CCTV cameras. He was in direct view of Nasheed’s home street when the explosion took place. The police believe that it was he who detonated the IED and have asked for public assistance to establish his identity.

The police have also released CCTV footage of the explosion, which shows Nasheed, surrounded by his security, walking from his residence in the narrow Neeloafaru Hingun to the car parked in Majeedhee Magu. The blast takes place just as he reaches the motorcycle, the IED was strapped to.

Commissioner of Police, Mohamed Hameed, said that the attack did not appear to have had any connection to foreign organizations and that the explosive used was not military grade.

The ADK Hospital tweeted on Friday to say that it had done 16 hours of “life-saving surgery” on Nasheed’s head, chest, abdomen and limbs and that the Speaker was still in a “critical condition”. But on Saturday, Nasheed’s sister, Nashida Sattar, tweeted quoting Nasheed as saying: “I’m good.” His brother, Ibrahim Nashid, said doctors were happy with Nasheed’s recovery. “He is out of life support and is breathing on his own,” Ibrahim said in a tweet.

The medical team that treated Nasheed said on Saturday that the metal ball bearings used in the blast had caused significant internal damage, but had missed major organs and arteries. One projectile that hit Nasheed’s lungs had narrowly missed his heart because it had struck a rib, doctors said.

Maldives has a reputation for political unrest. Nasheed, the Maldives’ first democratically-elected President, was deposed and exiled in 2012 in what he called a ‘coup’. In 2015, former President Abdulla Yameen escaped unharmed after an explosion on his speedboat. In 2007, a blast blamed on Islamist militants targeted foreign tourists and injured twelve.

On Thursday night, Nasheed’s supporters in the ruling Maldivian Democratic Party (MDP) gathered outside the ADK hospital, and  shouted slogans calling for the ouster of the police and army chiefs and also the resignation of President Ibrahim Solih, local sources said.

The demand for Solih’s resignation reflects deepening factionalism in the MDP, with one group supporting Nasheed and another supporting Solih. The Maldivian police chief is a close relation of the President. The army chief too is the President’s appointee. In the Maldivian system, the army (Maldivian Defense Force) is responsible for the personal security of top leaders. Hence the demand for the army’s chief’s scalp.

It was perhaps to deflect possible accusations of bias in the investigations, that President Solih announced that the government would get the assistance of the Australian Federal Police.

Back to factionalism in the MDP. The party did not field Nasheed as its candidate in the 2018 Presidential election because he had been sent to prison for a 13 year term on terrorism charges by the Yameen regime in 2015. After he was discharged, he was made Speaker of parliament which Nasheed saw as a sinecure.

Wanting to be in the limelight always, the ebullient Nasheed would often speak out of turn on matters of governance he had no authority to speak on. He would embarrass the government, the President and the ministers in the process. Recently, he proposed that the Presidential system be replaced by the parliamentary system and that he be made Prime Minister with all powers. He dropped the demand only when he found that it did not get traction.

Nasheed, with modernistic and Western ideas, has also been alienating Islamists who have a strong hold among the people of the Maldives. Nasheed would criticize the wearing of the burqa or sporting a beard suggesting that these were signs of extremism..

A radical section of Maldivian Islamists had periodically murdered liberal bloggers and others who promoted secularism and Westernization.  Dr Afrasheem Ali, an MP and a moderate Islamic scholar, was brutally murdered in October 2012 by a local extremist group with ties to al-Qaeda, according to the Presidential Commission on Deaths and Disappearances appointed by President Solih. The killers had local political support, it further pointed out.

Citing the report, Speaker Mohamed Nasheed said that the police knew the facts at the time of the murder but claimed that the killing was politically motivated and tried to blame the main opposition Maldivian Democratic Party. Nasheed said that the report named NGO Salaf and a YouTube channel among other groups which incited hatred against Dr Afrasheem, who was dubbed “Dr Ibilees” (Dr Satan).

The inquiry commission revealed that the same radical group was behind the Sultan Park bombing in Male in 2007, in which 12 foreign tourists were wounded. Islamic zealots had abducted journalist Ahmed Rilwan in August 2014 and had murdered blogger Yameen Rasheed in April 2017.

Sections of the MDP believe that both the army and the police have been infiltrated by Islamic radicals. “Nothing will come out of the on-going probe,” one of them, who is holding a government position, said dejectedly.

Human Rights Watch had said that senior officials, police, and judges had actively derailed earlier investigations into abduction and murder cases. Among them was a former Vice President, Ahmed Adeeb. According to the US Department of State, the Presidential Commission’s draft report had alleged that Adeeb intervened with the then Criminal Court Judge Abdulla Didi to free individuals who assisted and carried out journalist Rilwan’s abduction in 2014. Adeeb was arrested on suspicion that he was linked to the attempt to assassinate President Abdulla Yameen in 2015.