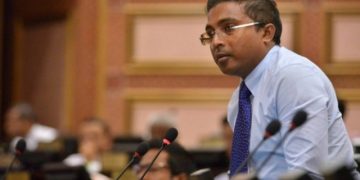 Abdulla Rifau moved the bill which necessitates written permission from the police to assemble in certain areas notified by the government through a gazette.

Male, August 16 (Sun.mv ONLINE): People’s Majlis on Monday agreed to consider an amendment to the right to assemble on streets, which will make it necessary to secure written permission from the police, though Art. 32 of the Maldivian constitution says that citizens have the right to peaceful gathering without prior permission from State authorities.

The amendment bill, proposed by South Maafannu MP Abdulla Rifau was accepted for consideration with the vote of 39 lawmakers. 22 lawmakers voted against accepting the bill.

The amendment says that though stated otherwise in the Constitutions, no gathering or rally can be held on the streets of Male’ in any other place than which published by Ministry of Home Affairs without written permission from Maldives Police Service. It says that Ministry of Home Affairs needs to publish a list of places permitted for gatherings in Government Gazette within 30 days the bill is passed and takes effect.

It takes effect the moment President ratifies the bill and publishes it in Government Gazette.