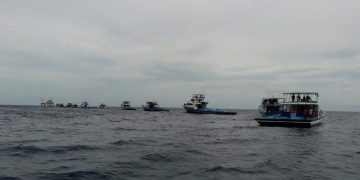 Maldives begins hunt for missing vessel with 25 on board

Maldives begins hunt for missing vessel with 25 on board Male, March 19 (newsin.asia) – Coastguards attached to the Maldives National Defense Force (MNDF), on Monday launched a search operation to locate a fishing boat with 25 people on board after it disappeared from radar late Sunday evening, local media reported.

MNDF said the boat was reported missing on Monday morning.

Officials said the fishing boat “Concord” departed on a fishing trip from Maradhoo, Addu City on Friday and last made contact on Sunday evening via a satellite phone.

Authorities said the boat was on its way back to dock after attending technical issues on its engine.