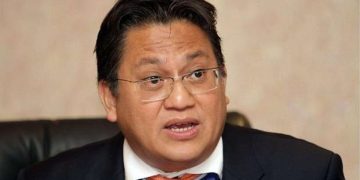 “It was an isolated incident triggered by political conflicts,” Nur Jazlan said.

“The incident had nothing to do with terrorism. However, necessary action has been taken against five people, currently in police custody,” the New Straits Times, quotes him as saying.

Nur Jazlan assured  that Malaysia will not meddle in Sri Lanka’s affairs, and that the incident will not have any impact on Malaysia.

On Sunday, the Sri Lankan envoy was assaulted by a group of Malaysian Tamils at the KLIA. The incident was captured on the airport’s CCTV system. Envoy Ibrahim Sahib Ansar  was at the KLIA to send off Sri Lanka’s Primary Industries Minister, Daya Gamage, who had attended the International Conference of Asian Political Parties (ICAPP), in Kuala Lumpur.

In response to the incident, Inspector-General of Police, Tan Sri Khalid Abu Bakar said police arrested five people over the assault. The men, aged between 27 and 56, were picked up in Dengkil, Ipoh and Kuala Lumpur. Four more suspects have also been identified, and an operation was launched to bring them into custody.

Khalid said police are probing local groups to check on their possible links with the Liberation Tigers of Tamil Eelam (LTTE) in Sri Lanka.

Earlier on Monday, the Sri Lankan Foreign Secretary Esala Weerakoon had called in the Malaysian High Commissioner in Sri Lanka and expressed disappointment about the lack of security for the Sri Lankan envoy in Malaysia and the mission. The security given was poor despite being told about the need for it in the context of demonstrations by local Tamils.

The Tamils had been holding demonstrations against the visit of the former Sri Lankan President Rajapaksa accusing him of committing war crimes. In the process of the agitation they assaulted the Sri Lankan envoy Ibrahim Ansar, a Second Secretary in the mission, and a local Sinhalese Buddhist monk, Ven.Saanankarar Thera.

The Sri Lankan Foreign Secretary asked Malaysia to pursue the assault case to the fullest extent and bring the culprits to book. He also sought greater security for the Sri Lankan mission and the Buddhist temple where the monk was attacked.

On Tuesday, in the Sri Lankan parliament, Prime Minister, Ranil Wickremesinghe, condemned the attack on the envoy.

Former President Rajapaksa who returned to Sri Lanka on Monday to a rousing welcome by his followers, said that the attack on the envoy was an attack on Sri Lanka. He further said that threats of assault will not prevent him from going anywhere.

The issue of political importance in Sri Lanka in as much as the security of a former President is involved. Mahinda Rajapaksa is popular among the majority Sinhalese community for defeating the LTTE and relieving the country of terrorism and separatism. But politically he is at odds with the incumbent President Maithripala Sirisena and Prime Minister Wickremesinghe. While Wickremesinghe is dubbed as being soft on Tamil separatism and the LTTE, Sirisena is accused of being Wickremesinghe’s  camp follower. The government has to be seen to be acting tough with Malaysia in this case to live down its image of being soft on the Tamil issue and extremism.