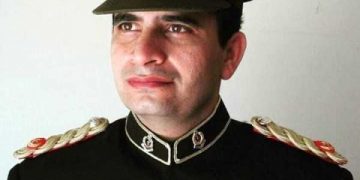 32
SHARES
Share on WhatsApp
Islamabad, August 2 (www.defence.pk): Major (Dr) Kelash Garvada is the first-ever  Hindu (Meghwar) officer to serve in Pakistan’s Ministry Of Defence. From Tharparkar in the province of Sindh, Maj.Dr. Kelash Garvada did his MBBS from LUHMS at Jamshoro, Hyderabad (Sindh) and later got a commission in the Pakistan army.
He was Army medical corps Captain and is now promoted as Major and posted in the Ministry of Defence.
He is the first Hindu officer to be selected for the emergency medicine course in the University hospital at Birmingham. He had the honor to serve civilian population through free medical camps in remote areas such as Tharparkar, Kashmir, Gilgit-Baltistan and Hunza valley.
Maj.Kelash Garvada has participated in Operation-Almeezan in Orakzai Agency in Waziristan and Operation Rahe-Nijant in Swat. He had also been deployed at the world’s biggest horse farmhouse remount depots in central Punjab and Quetta.
He has received Tamaga-e-Dafa (A Siachen Medal) for staying 36 days at world highest post saddle, in Baltoro sector near K2 of around 22,000 ft; Tamga-e-Baqa; and Tamga-e-Azam for fighting against terrorism. He has served in the UN peace mission in Sudan as staff Officer of SPAO (as a Senior Pakistani Army Officer) presented a study on Indus valley civilization and received a UN medal.
He has travelled to Uganda, Egypt, Dubai, Spain, France, Netherlands, Belgium, Italy, and Switzerland and is currently posted in 86 Medical Battalion at Quetta as Major and Officer in Charge health services delivery.
After 2000, Hindus were allowed to join Pakistan Army and since then, like Dr. Kelash Garvada there many Hindus serving in Pakistan Army even at the top-most level. There were Generals like Gen Julian Peter, a Christian, and Gen Kaizad Mack Sopariwala, a Parsee. Therewere Air Commodore and Naval Commodors.
One of our Supreme Court judges was Justice Bhagwan Das. The Chairman of the Balochistan Public Service Commission serving since 2014 is Bashasher Nath Kohli. Then there was Chief Justice Alvin Robert Cornelius, an Anglo-Indian Roman Catholic who, in 1940, even as an officer of the Indian Civil Service (ICS), helped draft the Muslim League’s “Pakistan Resolution” of 1940.
END
SendShare20Tweet5Share1Share