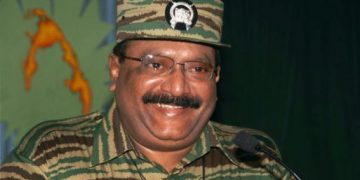 Aug 29 – With some Tamil nationalists in Sri Lanka believing that LTTE leader Velupillai Prabhakaran may still be alive, a Tamil National Alliance leader has said the LTTE supremo’s name could be reported to the newly setup Office of the Missing Persons (OMP).

M Shivajilingam, a member of the northern provincial council told a local radio station Neth FM that he was willing to report Prabhakaran’s name to the OMP set up by the government.

“If his sister or the brother wants it reported to OMP I am willing to come forward on their behalf,” he said.

Prabhakaran, 54, was declared killed by the Sri Lankan government’s troops on May 19, 2009 in Mullaivaikkal in the northern Mullaithivu district.
The discovery of the body with a fatal head injury marked the end to the two-and-a-half-decade-long civil war with thousands of remaining LTTE cadres surrendering to the government troops.

However, some Tamil nationalist hardliners had always doubted the government’s version of the story and believe that Prabhakaran may still be alive having escaped the final battle zone in 2009.

The OMP which the government has agreed to set up under its wider UN Human Rights Council resolution obligations has run into controversy with the opposition calling it a betrayal of the government troops who defeated the LTTE.

The government claims that the OMP was meant to give redress to tens of thousands reported missing in the country due to various conflicts both in the south and the north.

The International Red Cross (ICRC) had last month announced results from its survey which said that over 16,000 people remain missing in Sri Lanka after the end of the conflict in 2009.