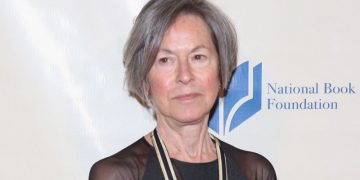 This year's Nobel Prize for Literature has been awarded to the US poet Louise Glück.

by Editor
in Around The World, Education, Instagram, World
Reading Time: 2 mins read
2 0 This year's Nobel Prize for Literature has been awarded to the US poet Louise Glück. Credits - Getty Images

The Academy added she was “surprised” when she received their phone call.

Glück, born 1943 in New York, lives in Massachusetts and is also professor of English at Yale University.

The Academy’s permanent secretary Mats Malm said he had spoken to Glück just before making the announcement.

“The message came as a surprise, but a welcome one as far as I could tell,” he said.

She is the fourth woman to win the prize for literature since 2010, and only the 16th since the Nobel prizes were first awarded in 1901. The last American to win was Bob Dylan in 2016.

Glück won the Pulitzer Prize in 1993 for her collection The Wild Iris and the National Book Award in 2014. Her other honours include the 2001 Bollingen Prize for Poetry, the Wallace Stevens Award, given in 2008, and a National Humanities Medal, awarded in 2015. She was also editor of the anthology The Best American Poetry 1993.

Her poetry focuses on the painful reality of being human, dealing with themes such as death, childhood, and family life.

She also takes inspiration from Greek mythology and its characters, such as Persephone and Eurydice, who are often the victims of betrayal.

The Academy said her 2006 collection Averno was a “masterly collection, a visionary interpretation of the myth of Persephone’s descent into Hell in the captivity of Hades, the god of death”.

The chair of the Nobel prize committee, Anders Olsson, also praised the poet’s “candid and uncompromising” voice, which is “full of humour and biting wit”.

Her 12 collections of poetry are “characterised by a striving for clarity”, he added, comparing her with Emily Dickinson with her “severity and unwillingness to accept simple tenets of faith”.

The prize is given to the person who has “produced in the field of literature the most outstanding work in an ideal direction”.