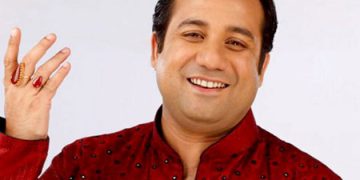 by Editor
in Around South Asia, Around The World, Cinema, India, Music and arts across South Asia, Pakistan
Reading Time: 1 min read
5 1 Now, RFAK is back in the studio and his latest track for Bollywood film Welcome to New York is out.

Rahat Fateh Ali Khan has teamed up with singer Dhvani B for ‘Ishtehaar’ and according to Mumbai Mirror he was impressed by her vocals!

“‘Ishtehar’ is a soulful rendition and it was a pleasure to sing to the music of Shamirji. It’s great to witness a young girl like Dhvani who has a lovely voice making her debut and sing besides me,” said RFAK, adding, “Shamirji has beautifully composed the song with Charanjeetji’s lyrics, giving it that magical touch.”