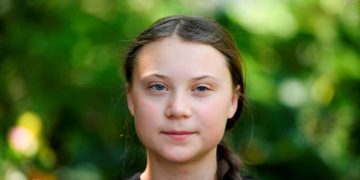 by Editor
in Around The World, Climate Change, World
Reading Time: 2 mins read
7 0 © Lionel Bonaventure/AFP/Getty Images On Aug. 20, 2018, a 15-year-old girl skipped school to protest outside the Swedish parliament and inadvertently started the “Skolstrejk för klimatet” (school strike for climate) movement that would go on to create ripples across the globe. The teenage activist was Greta Thunberg. She has since become one of the most important voices in environmental activism.

July 17 (EveningStandard) – Swedish climate activist Greta Thunberg is demanding action from European Union leaders and heads of state, and she’s enlisted the help of some A-list celebrities to spread the word.

The 17-year-old co-wrote an open letter on July 16, which was sent to EU and global leaders, and is available online for anyone to sign.

The letter calls for world leaders to help “avoid a climate catastrophe” by enacting a series of steps that includes halting all investments in fossil fuel exploration and extraction.

“It is now clearer than ever that the climate crisis has never once been treated as a crisis, neither from the politicians, media, business, nor finance,” the letter stated.

“Climate and environmental justice cannot be achieved as long as we continue to ignore and look away from the social and racial injustices and oppression that have laid the foundations of our modern world,” it went on to say, later noting, “Science doesn’t tell us exactly what to do. But it provides us with information for us to study and evaluate. It’s up to us to connect the dots.”

The letter noted that “a new system” was needed, as the world faces “a crisis that we cannot buy, build or invest our way out of.”

Using the hashtag ‘Face The Climate Emergency,’ Thunberg shared the letter on her Twitter, thanking some of the activists and celebrities who had already shown their support with their signature.

Included in the list was actor and environmental activist Leonardo DiCaprio, who called Thunberg “a leader of our time” when they met in 2019. “She and I have made a commitment to support one another, in hopes of securing a brighter future for our planet,” he wrote on Instagram.

“Needless to say, everyone is equally important,” Thunberg wrote on Twitter following her long list of influential supporters. “But the climate movement desperately needs new strong voices. So everyone is more than welcome!”