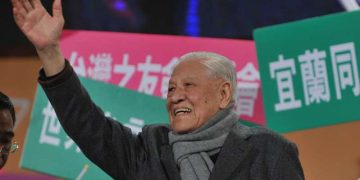 July 31 (The Guardian) – Lee Teng-hui, known as Taiwan’s “father of democracy” and its first popularly elected president, has died, according to a statement from his family.

Lee, who oversaw Taiwan’s transition from martial law to one of the most vibrant democracies in Asia, died of septic shock and multiple organ failure at Taipei Veterans general hospital on Thursday evening. He had been in hospital for more than five months after choking while drinking milk and later contracting pneumonia. He was 97 years old.

Lee served as president between 1988 to 2000, overseeing the end of authoritarian rule under his party, the Nationalist party, which had taken over Taiwan after fleeing from mainland China in 1949 following defeat by the Chinese Communist party.

A statement from the office of the current president, Tsai Ing-wen, said: “President Lee’s contribution to Taiwan’s democratic journey is irreplaceable and his death is a great loss for the country.”

The ministry of foreign affairs said in a statement: “The world will remember him as Mr Democracy, the architect of Taiwan’s modern liberal democratic system, which allows the country to stand tall on the global stage.”

Born in Sanzhi, a rural outpost near Taipei, when Taiwan was under Japanese control, Lee became the country’s first native born president, taking up the post after the death of Chiang Ching-kuo in 1988. Chiang had chosen Lee as his vice-president at a time when top positions were normally reserved for those born in mainland China.

In 1996 he became the first president to be elected by popular vote after months of missile tests and war games launched by Beijing in an effort to intimidate voters.

Lee called for Taiwan to be treated as a sovereign state and pushed for self-determination. Attempting to bridge the divide between those born in mainland China who fled to the island in 1949 with the Nationalists and those native to Taiwan, he promoted a “new Taiwanese” common identity.

While he overhauled relations with the Chinese Communist party, opening talks in the 1990s that would enable trade and economic links, Beijing labelled Lee a “secessionist” with state media describing him as the “scum of the nation”.

China believes that Taiwan is an inalienable part of the country and has pledged to bring the island into the fold by force if necessary. Lee wrote in 2005: “It is an unquestionable fact that Taiwan does not belong to China.”

In a post on Facebook, Tsai Ing-wen wrote: “Lee was not afraid to talk about life and death. Because he was aware of death he could think about the meaning of life … Although he has departed the world today, he left democracy and freedom to Taiwan.”