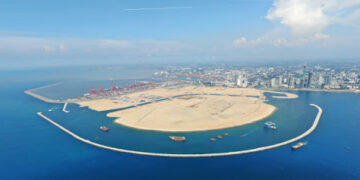 Gamini Marapana President’s Counsel, was the Counsel for the Intervenient Petition filed by Minister of Education Prof. G.L. Peiris in support of the Colombo Port City Economic Commission Draft Bill recently, following a number of Special Determination Petitions filed against the draft bill at the Supreme Court. He is the brother of Tilak Marapana PC, who served as the Minister of Foreign Affairs in the ‘Good Governance’ or ‘Yahapalana’ Government,

S.R. Attygalle has represented the Treasury in key committees appointed by the Cabinet of Ministers, including as the Head of the technical team negotiating the Free Trade Agreement with China. Attygalle holds a Masters (M.Sc.) Degree in Quantitative Development Economics from the Warwick University, United Kingdom

Dr. Priyath Bandu Wickrama was Chairman of the Sri Lanka Ports Authority and held director posts at several other state organizations such as National Paper Company Ltd and Urban Development Authority of Sri Lanka. He has a mechanical engineering graduate from University of Moratuwa.

Saliya Wickramasuriya was Petroleum Resources Development Committee at Government of Sri Lanka. He is an experienced Independent Consultant with a demonstrated history of working in the E&P and energy industry in both the service sector and Government. Professionally trained upstream regulator, he has a degree in Engineering Physics from Loughborough University of Technology.

Rohan de Silva, is Chairman and MDMcLarens Group Chairman and Managing Director. A dynamic entrepreneur and a well-established business practitioner with forty years of experience in varied business activities, particularly in Shipping, Marine and Logistics. Mr. Rohan De Silva currently heads the McLarens Group as Chairman/Managing Director (since 1992) and is responsible for group profitability as well as business development through innovation and investment in new ventures. Developing new ideas with commercial viability has been a tremendous strength in his career. He is extensively involved in promoting large scale foreign investments as well as implementation of new services and infrastructure projects in Sri Lanka.