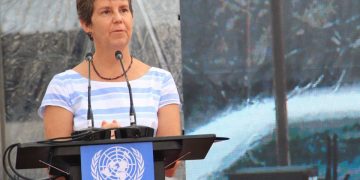 Colombo, Feb 27 (newsin.asia) – In accordance with her wishes, the last rites of UN Resident Coordinator and UNDP Resident Representative, Una McCauley, will take place in Colombo, Sri Lanka, the UN Office in Colombo said in a statement on Tuesday.

The remains will lie at the Jayaratne “Restpect” Parlour, Bauddhaloka Mawatha, Colombo 8, on Friday, March 2, from 1.30 p.m. to 3.30 p.m. The cremation will be at 4.00 p.m. at the New Crematorium at the Borella Cemetery.

Representing the UN Secretary-General and on behalf of UNDP, the UN Assistant Secretary-General, Haoliang Xu, will arrive in the island to offer condolences to McCauley’s family. The Director of the UN Development Operations Coordination Office, Kanni Wignaraja, will also attend the funeral service.

The United Nations in Sri Lanka announced on Feb 24, the sudden passing away of its Resident Coordinator and UNDP Resident Representative in Sri Lanka, Una McCauley.

McCauley, 54, was on medical leave as she was undergoing treatment.

As the first female UN Resident Coordinator in Sri Lanka, McCauley was a bold, inspiring, and strong leader. As the most senior UN Official in the country, she led the UN Country Team of 21 Resident and Non-Resident UN Agencies and acted as the representative of the UN Secretary-General in Sri Lanka. She was a passionate and caring humanitarian, dedicating her life to serve people of the world.

McCauley was serving in Sri Lanka for six years; two years as UN Resident Coordinator and UNDP Resident Representative, and prior to this, as the UNICEF Representative in Sri Lanka. Previously, she was the UNICEF Representative for Panama and Togo, and worked at the UNICEF offices in Sudan, Kenya, and Angola. With 17 years of service within the United Nations System and an additional 7 years of service working with children in the development sector, McCauley was instrumental in developing policies and strategic frameworks on leading global issues in a number of countries.