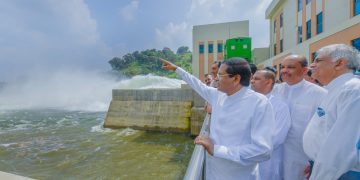 Colombo, Jan 8 (newsin.asia) – Sri Lankan President Maithripala Sirisena and Prime Minister Ranil Wickremesinghe, on Monday, opened the sluice gates of country’s largest water reservoir in Moragahakanda, in the island’s Central Province which will supply water to the dry zones and to thousands of families in several districts.

The sluice gates were opened at the auspicious time of 11.20 am following religious ceremonies in the midst of hundreds of people.

The President and Prime Minister were accompanied by the Speaker of Parliament, Karu Jayasuriya, several ministers, government officials and foreign dignitaries including those from the Chinese Embassy in Sri Lanka. The project was mainly designed and constructed by POWERCHINA. Sirisena praised the hard work undertaken by POWERCHINA throughout the construction process.

The waters from this reservoir will irrigate parched dry lands in faraway Vanni in the Northern Province and Rajarata, Wayamba, Central and Eastern Provinces. It will pave way for an increase of 64,000,000 cubic metres of water to flow from the reservoir to far flung regions including, the Vanni, Matale, Anuradhapura, Trincomalee, and Polonnaruwa.

The Moragahakanda Dam is a high gravity dam with a height of 65 meters. The dam has created the Moragahakanda Reservoir, which has an active storage capacity of 521,000,000 cubic meters.

The project will also generate 25 MW in hydropower to the national grid. The other objectives of the project are to increase inland fish production, provide potable and industrial water requirements, enable ecotourism and ensure effective flood control.

45 year old Kumara Perera, a farmer from Polonnaruwa who attended the opening ceremony said he was awaiting the opening of the Moragahakanda Project as this would ensure a continuous water supply into his village.

He said his village had been facing a drought for several months and as a result, crops had dried up. Kumara said water was an issue for all villagers in his village and he hoped that with this project, his water woes would end.

The President’s Office said water from both, the Moragahakanda and Kalu Ganga reservoirs, will be primarily used to support agricultural needs in an area of at least 81,422 hectares. This would increase rice production by 81 percent or 109,000 tons, amounting to an estimated monetary benefit of US$1.67 million, annually.