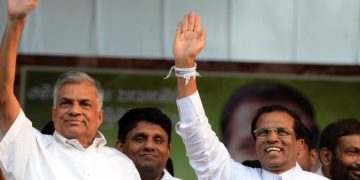 Lanka’s coalition Govt expected to continue, but with a new populist and nationalistic look

Lanka’s coalition Govt expected to continue, but with a new populist and nationalistic look Colombo, February 15 (newsin.asia): The troubled Sri Lankan ruling coalition appears to have resolved its internal differences  and decided to continue. The is expected to be announced by President Maithripala Sirisena at his meeting with the domestic press on Friday.

But the orientation of the coalition is expected to be markedly different from what it was before the February 10 Local Bodies elections which the government parties lost badly to a new outfit, the Sri Lanka Podujana Peramuna (SLPP), led by former Lankan President Mahinda Rajapaksa.

President Maithripala Sirisena and Prime Minister Ranil Wickremsinghe had a further round of discussions on Thursday even as the bi-partisan committee was thrashing out issues which had threatened the very existence of the coalition after the February 10 debacle.

Available information is that the two top level leaders have agreed to work together in the same capacity as before, but the cabinet is expected to be reshuffled to reflect and implement manifestly populist and nationalistic policies and programs.

One of the criticisms of the opposition SLPP has been that the National Unity Government principally comprising the Sri Lanka Freedom Party (SLFP) led by Sirisena, and the United National Party (UNP) led by Wickremesinghe, has not been pursing policies which accord with the real and pressing needs of the Sri Lankan hoi polloi.

It has been pandering to the West; and following neo-liberal economics, which has meant limiting subsidies, reducing deficit spending, limiting protectionism, opening up the market to foreign competition, deregulation and privatization.

However, it was not as if the entire coalition was neo-liberal in thinking.  Only the UNP was. But the UNP had most of the economic ministries, including Finance.

In fact, the SLFP led by President Sirisena had to intervene frequently to reverse unpopular neo-liberal decisions of UNP ministers, including Prime Minister Wickremesinghe.

The SLFP and the President had differences with the Prime  Minister and the UNP, on foreign investments and collaboration proposals also.

The President had often felt that national interests or the interest of the common man were not being taken into account and he would plead for a change in the approach every time he  addressed an investment conference.

Towards the end of the campaigning  for the Local Bodies’ elections, two decisions of UNP ministers proved to be very unpopular and were subjected to ridicule  by the SLPP.

One was the sudden lifting of the ban on selling liquor to women and the extension of the hours for which liquor shops could be kept open in the evenings. This clashed with Lankan traditional culture which values temperance especially among women.

The other was the promise to give free Wi Fi to the island’s villages ignoring their real problems. Rajapaksa quickly scored a propaganda point by taunting the government saying that in the current rulers’ estimation, the “burning issue” in Sri Lanka’s villages is neither the rising cost of living or the high prices agricultural inputs but lack of “Wi Fi”.

Under the new dispensation ,foreign investments and trade agreements might be examined more carefully to safeguard the interests of the common man and local businessmen and professionals.

In the last  three years, President Sirisena had to intervene many times to stop negotiations or projects which did not accord with national interests in terms of ownership and employment and business opportunities for locals. Sirisena has been against foreign investment and globalization for their own sake.

A cabinet reshuffle is the most likely outcome of the new orientation.  The President-led SLFP is expected to take on more economic ministries and the President himself could directly monitor the economic policies and actions of the ministers. He already has an economic council advising him on such matters.

The decision to continue the SLFP-UNP coalition stems from the fact that the alternative is mid-term elections or polls two years before the completion of parliament’s term –  a prospect no MP, of whatever party, likes.

The second reason is that if the UNP or the SLFP was allowed to go it alone, the government will be inherently unstable.

Indeed ,the UNP is the single largest party with 106 members in a House of 225. But it still needs seven more to have a simple majority. The SLFP has only 95 including the breakaway SLPP. d. It needs many more MPs to get a simple majority.