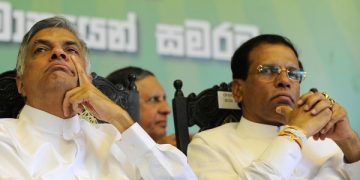 Colombo, December 13 (newsin.asia): By ruling as null and void, the Presidential gazette dissolving parliament and ordering fresh elections, the Sri Lankan Supreme Court has left President Maithripala Sirisena with no option but to eat humble pie and re-appoint his bete noire, Ranil Wickremesinghe, as Prime Minister.

But according to sources close to the President,  Sirisena has a plan to continue his resistance to Wickremesinghe.

After hearing the judgment on Thursday he told his Sri Lanka Freedom Party (SLFP) that if he has to appoint Wickremesinghe, he will not participate in the government’s decision-making process but will continue to carry out his responsibilities as the Executive President.

This could mean that the Executive Presidency will be pitted against the Prime Minister and his cabinet. An Executive President could put spokes in the cabinet’s wheel, forcing the government to come to a grinding halt.

However, if the United National Front (UNF) comes up with an alternative to Wickremesinghe like Sajith Premadasa, Sirisena will fully participate in decision making in the cabinet as its head and the government will run smoothly, the sources added.

Therefore, the controversy over the re-appointment of Wickremesinghe will remain to destabilize the Sri Lankan government unless, of course, the  UNF climbs down and puts forward Sajith Premadasa as the alternative candidate.

But the million dollar question is: will the UNF do it after the Supreme Court had given its political prospects a shot in the arm?

On October 26, President Sirisena had unceremoniously relieved Wickremesinghe from the Premiership and appointed Mahinda Rajapaksa of the Sri Lanka Podujana Peramuna (SLPP) as Prime Minister even though Wickremesinghe commanded majority support in parliament and Rajapaksa did not.

When Rajapaksa failed to get a minimum of 113 out of the 225 MPs to support him, despite prorogation of parliament to enable him to indulge in horse-trading, Sirisena dissolved parliament on November 9 and ordered fresh elections.

But supporters of the ousted Prime Minister went to the Supreme Court saying that the dissolution of parliament before it had completed four and a half years of its five-year term was a violation of the 19 th. Amendment of the constitution and therefore should be declared null and void.

Parliament had also not passed a resolution backed by a two-thirds majority requesting the President dissolve it and order fresh polls. The dissolution, therefore, was unconstitutional they argued. The court on Thursday upheld this view.

The continuance of Rajapaksa and his cabinet as Prime Minister and ministers was challenged in the Court of Appeal on the grounds that he and his government had been defeated twice in voting on a Motion of No Confidence moved on November 14 and 16.

The President was firm that he would not appoint Wickremesinghe “even if all the 225 MPs demanded it.” He continued to insist that it was his prerogative to appoint any MP as PM who, in his opinion, commanded majority in parliament. He was insisting that the UNF should be able to find at least one alternative to Wickremesinghe. He had even suggested that Sajith Premadasa, Deputy Leader of the United National Party(UNP), be chosen.

But the UNF and its ally, TNA, would not back out. They even persuaded the President’s choice for Premiership, Sajith Premadasa, to move a resolution in parliament on Wednesday saying that parliament has confidence in the leadership of Wickremesinghe.

117 out of 225 MPs voted for the motion,  sending a clear message to the President that the majority of parliamentarians would brook none other than Wickremesinghe as Premier.

On Thursday, the seven-bench Supreme Court gave its ruling on the dissolution of parliament saying that the gazette ordering dissolution was unconstitutional.

Given the ruling, the parliament elected in August 2015 has been formally revived. As per the present line up, Wickremesinghe has the majority with 117 out of 225 members with him.

Earlier, when the No Confidence Motion against Prime Minister Rajapaksa was voted upon, 122 MPs (or the majority) voted against Rajapaksa.

Therefore, President Sirisena has no option but to appoint Wickremesinghe and eat back all the harsh words he had uttered about Wickremesinghe. Wickremesinghe was dubbed as a corrupt and arrogant person who was even a personal and national security threat.

The court ruling is a big blow to Sirisena. But perhaps anticipating the court ruling, Sirisena had recently said that he would abide by the court’s decision.

Sirisena has two options: He could either re-appoint Wickremesinghe and try to work with him till the end of the parliament’s term in August 2020, or he could resign.

But he told his Sri Lanka Freedom Party(SLFP) after the judgement Thursday evening that he will not participate in the government if Wickremesinghe has to be appointed Prime Minister. A close associate told newsin.asia that Sirisena would sit in the cabinet meetings and chair them, but not participate in its proceedings. But he would exercise his prerogatives as the Executive President, Head of State and Head of Government.

This means that Sirisena could countermand and annul decisions taken by the Wickremesinghe-run government and create deadlocks.

Sirisena however made it clear that he would cooperate with the government if the United National Front (UNF) puts up somebody else like Sajith Premadasa as the Prime Ministerial candidate.

In the recent past, he had threatened to resign and get back to farming in his native Polonnaruwa district if MPs did not respect his sentiments and act accordingly.

The answer could be “no”, since he has been nursing an ambition to try for a second term. He hopes to get the backing of the popular SLPP leader Mahinda Rajapaksa. The two are already allies since October 26.

As regards Rajapaksa, he would resign. He has always said that he prefers fresh parliamentary elections to being in office as PM without the backing of parliament.

Rajapaksa would allow Wickremesinghe to be PM with the expectation that the latter’s government will be non-functional given the deep-rooted differences between President Sirisena and Wickremesinghe.

In its three and a half years in office, the UNF led by Wickremesinghe has had a poor record, which is unlikely to be improved in the next year and a half.

The UNF regime had kept postponing provincial and local elections for fear of being defeated. And when the local bodies elections were held finally in February 2018, the UNF got a drubbing at the hands of Rajapaksa’s SLPP.