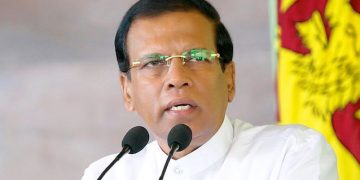 by Editor
in Around South Asia
Reading Time: 2 mins read
1 0 He had intended to address editors of local media institutions on Friday to announce his decision on the fate of the government.

According to the cabinet spokesman, Rajitha Senaratne, the President had decided to continue the coalition with a new look cabinet aimed at making the government popular to meet the emerging challenge  from the Sri  Lanka Podujana Peramuna (SLPP) led by former President Mahinda Rajapaksa.

But given mounting pressure from his party men not to continue the coalition with Wickremesinghe as Prime Minister, the President cancelled the press conference.

The SLFP/UPFA leaders (not the party chairman Sirisena) and cadres strongly feel that they should try to win over Rajapaksa and form a government, although it will be hard to get 17 more MPs to get a  simple majority in parliament.

They feel that Rajapaksa can be won over as, after all, he was in the SLFP and his followers and voters are basically former SLFP.

The UNP, on the other hand, needs only seven more MPs to get a simple majority and is therefore emboldened to stick to its claim to be best equipped to form a government on its own or have a coalition with the SLFP with Wickremesinghe as Prime Minister.

But SLFP leaders and cadres firmly believe that the government parties were defeated in the Local Bodies elections because of the pro-capitalist and pro-Western policies of the UNP and its leader Wickremesinghe, especially Wickremesinghe as Prime Minister.

Therefore continuing the coalition with Wickremesinghe as leader would only ensure the party’s defeat in the parliamentary elections due in August 2020.

But Rajapaksa wants to get parliament dissolved now, to enable him to come to power on his own steam. He does not want to join SLFP persons who ditched him and joined the UNP to defeat him in the January 8, 2015 Presidential election.

Given the sharp divide between the SLFP/UPFA and the UNP and the belligerence and vaulting ambition of Rajapaksa’s SLPP, the President may have to ask parliament to pass a resolution backed by a two thirds majority seeking dissolution of parliament and fresh elections.

This procedure is mandated because in the natural course, the President can dissolve parliament prematurely only a year and a half before its stipulated end, that is after February 2019.