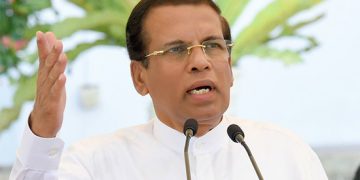 Colombo, July 6 (newsin.asia): “During my tenure as President, I will not allow the government to sign any agreement with any world power, which is a challenge to the country’s independence and sovereignty or is not suitable to the country,” the Sri Lankan President Maithripala Sirisena said on Saturday.

He was speaking in the concluding session of the “Let’s Stand Together for the Country” Monaragala District Program held at the Bibila Public Ground on July 6.

“Although there are discussions in the society about agreements such as SOFA (Status of Forces Agreement) and  Millennium Challenge Corporation (MCC) and a Land Act which is not suitable to the country, I will give no room for signing such detrimental agreements”,  Sirisena aadded.

He charged that when he is taking the lead to eradicate the drug menace in the country, politicians as well as officials have come forward to protect the drug dealers.

“Innocent children of this country will have to bear the consequences of their unscrupulous acts in a few years,” he added.

“Those who file petitions against the death penalty irrespective of their positions are the dupes of these drug kingpins,” the Presidential Media Division quoted him as saying.

“One cannot ignore the damage caused by illegal drug trafficking and it has developed into a national disaster because none of the politicians who assumed power in the past took action against the drug dealers for their petty political gain. A considerable drawback can be seen in drug trafficking due to the stern actions now being taken,” President claimed.

The fifth phase of the“Let’s Stand Together for the Country” program launched island-wide by the Presidential Secretariat under the direction of President Sirisena to identify unresolved issues in the rural areas and to find effective solutions to them commenced on July 6 in Monaragala.

In order to increase the quality of medical treatment and clinical services provided to those who are affected by kidney disease, the Kidney Unit established at a cost of Rs. 36 million at the Wellawaya Base Hospital was also vested with the people by President Sirisena via remote communication technology.

The communiqué on environmental responsibility was handed over to the President by the  Chairman of the Central Environment Authority, Isura Devapriya.

Ministers Gayantha Karunathilleke, Ranjith Madduma Bandara and Daya Gamage, and the Governor of the Uva Province Marshall Perera, were present.