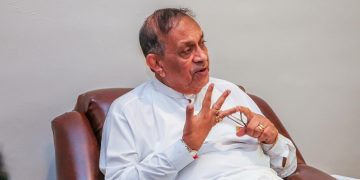 Lankan Presidential poll could be a referendum on Executive Presidency

Lankan Presidential poll could be a referendum on Executive Presidency Colombo, September 20: The Sri Lankan Presidential election, to be held on November 16, is likely to be a referendum on the continuation or abolition of the Executive Presidential system if the ruling United National Party (UNP) chooses Karu Jayasuriya as its candidate.

Jayasuriya, who is the current Speaker of parliament, has unequivocally stated that he will abolish the Executive Presidency after his election and return the country to the Westminster-style parliamentary system which existed before 1978. Jayasuriya has made abolition his main election plank.

“I can consider running for the office of President based on our Party’s pledge since 1995 to abolish the Executive Presidency. My intention is to abolish the Executive Presidency within a limited period of time. I am not coming forward in expectation of serving in the post of President,“ Jayasuriya said in a special communiqué when he declared that he is willing to contest if nominated by the UNP and its alliance Democratic National Front (DNF).

Jayasuriya is backed by Prime Minister Wickremesinghe who also controls the UNP machinery.

“Some have met me personally, while some have spoken to me on the telephone, and some have addressed me through the media, asking me to come forward as a candidate at the Presidential Election to address a few specific issues.”

“They are keen to ensure that democracy is further consolidated in the country and that a principled society is built,” he said.

“Any prospect of my accepting a nomination to contest as a Presidential candidate would be conditioned upon the support of all forces united behind the critical objective of abolishing the Executive Presidency, which has been the objective of civil society since 1995,” Jayasuriya said.

Jayasuriya insisted that democratic reforms, first brought forward by the 17th Amendment to the Constitution, and thereafter strengthened by the 19th Amendment, must be safeguarded, and form the foundation for broader constitutional reform.

“I must emphasize that I would not accept such an offer out of a desire for the powers of the Presidency. I would only serve in office for such a limited period as is necessary to complete the constitutional reforms that we promise, in order to lay the foundations for a secure, prosperous, and advanced democracy,” Jayasuriya said.

Commenting on the possibility of the UNP getting divided on the issue, a Jayasuriya supporter said that if Jayasuriya is declared the candidate of the party, rival Sajith Premadasa who is not clear on the issue, will fall in line.

“Abolition of the Executive Presidency has been a UNP policy since long, especially in the 2015 Presidential election. Sajith should know it,” the Jayasuriya supporter said. He pointed out that Sajith had publicly stated that he would abide by the party’s final decision on the issue.

Among the other candidates in the fray, Anura Kumara Dissanayaka of the Janata Vimukthi Peramuna (JVP) is firmly for abolition, and Gotabaya Rajapaksa of the Sri Lankan Podujana Peramuna (SLPP), is firmly against its abolition.

President Maithripala Sirisena publicly stated that the next parliament, to be elected in 2020, will abolish the Executive Presidency and asked people to vote for a new powerful Prime Minister rather than a new dummy President.

But Sajith Permadasa, who is a contender for UNP’s nomination, is neither here nor there. On the one hand he says there is no “scientific” study to show that the Executive Presidency is unsuitable, but on the other hand he says he will follow his party line on the issue.

In 2015, the JVP had introduced a Private Member’s’ Bill in parliament to enact the 20 th., Amendment to the constitution to abolish the Executive Presidency. But the Supreme Court said that the amendment would need two-thirds majority in parliament and a referendum to boot, as it was tantamount to changing the constitution in a fundamental way.  The JVP is going to fight the November 16 Presidential election with the abolition of the Executive Presidency as a main plank.

The principal opposition candidate, Gotabaya Rajapaksa of the SLPP is all for the retention of the Executive Presidency and even its strengthening, in order to be able to run the government effectively, untrammeled by parliament. Gotabaya is of the view that the Tamil Tiger rebels would not have been defeated in 2009 if the country did not have a strong Executive President to take quick decisions and implement them.

A good number of Sri Lankans are for the retention of the Executive Presidency. These are mostly from the ranks of the majority Sinhala-Buddhist community who believe that only an empowered Executive President elected by them largely, will safeguard the majoritarian interest. They believe that vesting power in a parliament in which parties of the ethnic minorities have a significant presence due to the proportional representation system, will jeopardize  their political interest and also national security threatened by “Tamil and Muslim separatism and Islamic terrorism.”

They also feel that given the current instability and disunity in the government, where power is divided between an Executive President and a Prime Minister, there is a crying need for a strong leader vested with vast powers to implement programs and projects in an unimpeded way.

The SLPP candidate Gotabaya Rajapaksa has been pleading  for this and hopes to get the majority community’s votes on the basis of his arguments of a strong Executive Presidency.

Parties of the minority Tamils and Muslims are for the abolition of the Executive Presidency because in a parliamentary system combined with elections to parliament on the basis of the Proportional Representation System, their power will increase. The Tamil National Alliance  (TNA), for example, complains that after the Presidential election, the directly elected Executive President completely ignores the Tamils, something an empowered Prime Minister, dependent on parliament all the time under the Westminster system, cannot do.

Abolition has the support of democrats, the civil society and also the Western powers, who have considerable influence over civilian society and the human rights lobby in Sri Lanka.

The fact that the Executive President is directly elected by the people gives him considerable political and moral authority too. The incumbent President Maithripala Sirisena has shown how he can stall any move by the Prime Minister even if the latter has majority support in parliament.

Therefore, democrats as well as the Marxist JVP have been seeing the full abolition of the Executive Presidency as a dire necessity. The 20 th.Amendment proposed by the JVP is thus seen as a worthy substitute for the 19 th.,Amendment.