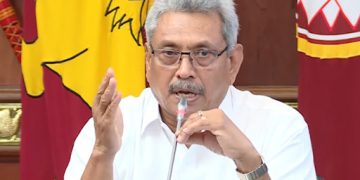 Colombo, June 23 (newsin.asia): Sri Lankan President Gotabaya Rajapaksa on Tuesday highlighted the need for the media to preserve the Sri Lankan identity and Sri Lankan cultural values and in that context, emphasized the necessity of establishing guidelines for selecting foreign programs for telecasting.

He made this comment during a progress review meeting with the government-owned Independent Television Network (ITN) at the Presidential Secretariat.

President Gotabaya said that changes should be made to create a new television culture. Programs to improve knowledge were discussed. The majority of the attendees accepted the National Policy Framework; ‘Vistas of Prosperity and Splendor’ presented during the Presidential election campaign.

The President stated that he does not want media to promote his personal image. “What I expect is to take to the people, the vision enshrined in the policy framework, which my government is committed to executing,” the President added.