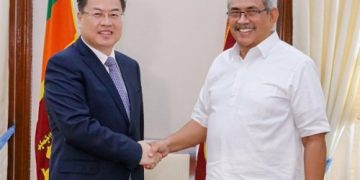 In reply, Ambassador Chen said that the Port City will see “high rise buildings come up in about two years.”

President Gotabaya Rahapaksa requested Ambassador Chen to convey to his government Sri Lanka’s wish to get continued support from China to execute new projects. In this context he mentioned the Colombo-Ratnapura Highway; Solar and Wind Power renewable energy projects; and projects to uplift the standard of living in the villages.

Ambassador Cheng Xueyuan, who called on the President to bid goodbye, said that he was going on promotion and that he would do what he can for Sri Lanka in his new assignment.

Chen was deeply appreciative of both the Sri Lankan government and the Sri Lankan people for the support and solidarity they showed to China during their darkest hour brought on by the corona virus.

He thanked the President for the consignment of black tea he  had gifted to those affected with by  the virus as well as the “pirith” chanting that took place across the Island for the speedy recovery of the patients suffering  from the corona virus.

Chen said that the situation in China is now rapidly coming under control and the number of infected has fallen.