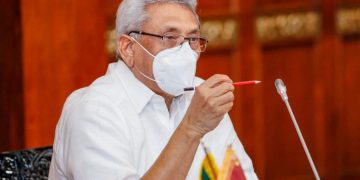 All issues being tackled by task force headed by Basil Rajapaksa Colombo, April 27 (President’s Media Division):  The Imposition of an all-Island curfew gave rise to a debate as to whether life can take precedence over livelihoods.

“We all aware that the current curfew disrupts day-to-day life,” President Gotabaya Rajapaksa stated. “But we as a nation are fighting against an invisible enemy.”

The President made these comments while talking on a number of key concerns regarding the COVID-19 epidemic with his Principal Advisor, Lalith Weeratunga, on TV on April 20.

The President outlined the steps taken to: prepare the country to confine people to homes; ensure the continuation of production in sectors such as agriculture that have a direct impact on peoples’ lives; safeguard economically challenged communities; maintain a continuous flow of essentials and essential services needed for everyday life; and confine people to their homes.

The price of dhal and sardin tins was subsidized before the curfew was imposed. The government allowed agricultural operations to continue. Permission was granted to farmers in Ampara, Anuradhapura, Polonnaruwa and other areas to continue their agricultural activities.

There is a significant population that survives on daily wages. Three-wheeler drivers alone comprises 1.5 million in this group. In addition, factory workers and self-employed also fall into this category. These will become vulnerable with a prolonged curfew. Without their daily income, they will not be able to survive.

After identifying hundreds of thousands who will be adversely affected, the President took measures to provide as much relief as possible, including monetary aid. It was ensured that during this period these families will be able to meet their basic requirements.

A special Task Force under the leadership of Basil Rajapaksa created a mechanism to look into every aspect of the day-to-day life of an ordinary citizen.

In addition, salaries and pensions were paid on time and repayment of loan installments including personal loans were suspended. Furthermore, those who earn a daily income as three-wheeler drivers, school van drivers and bus drivers were provided with concessions in lease payments. Assistance was also provided to private companies which were finding difficulty in meeting salary payments.

Though there had been some criticism over delays, in reality, vulnerable segments have been looked after by carefully laid out mechanisms.