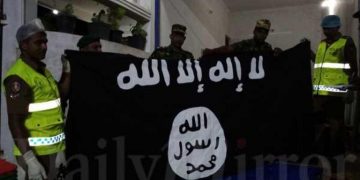 Colombo, April 27 (newsin.asia): Sri Lankan President Maithripala Sirisena has on Saturday taken steps to ban the National Thawheed Jammath (NTJ) and Jamathei Millathu Ibraheem (JMI) in Sri Lanka as per powers vested in him under Emergency Regulations No. 01 of 2019.

The President’s Media Division said that “all activities of those organizations as well as their property will be seized by the government.”

“Steps are been taken to ban other extremist organizations operating in Sri Lanka, under Emergency Regulations,” the release said.

The Jamathei Millathu Ibraheem (JMI) which has been banned along with the National Thaeheed Jamaath (NTJ) by the Sri Lankan President Maithripla Sirisena on Saturday, is but an adjunct of the NTJ and was used by the latter as and when required by the NTJ leader Zahran Hashim, who blew himself up in a suicide attack on Shangri-La hotel on April 21, informed sources in Kathankudi said.

“The JMI was used by Zahran as when he needed a cover for his activities. We suspect that the attacks on Buddhist statues were conducted by the JMI. The JMI has been preaching against idol worship,” Ameer said.

He likened the JMI to the “Elara” force during the war between the Liberation Tigers of Tamil Eelam (LTTE) and Sri Lankan forces in North Sri Lanka.

“During peace talks and ceasefires the LTTE would attack government forces but when questioned would deny that it had broken the ceasefire and would put the blame on the shadowy Elara force, “ Ameer explained.

The JMI has been a shadowy organization and therefore very little is known about it, Ameer added.

Informed sources said that the JMI of Sri Lanka should not be confused with the Jamaat ul Mujahideen India (JMI). The Indian JMI had nothing to do with Zahran and his Jamathei Millathu Ibraheem (JMI) in Sri Lanka.

It is also wrong and misleading to say that Zahran was radicalized in India. He was more radical than any other individual or outfit.

A total of 15 bodies including women children have been recovered from the site of explosions and a gun battle at Sainthamaruthu, Kalmunai in the  Eastern Province on Friday night .

The Police Spokesman said that the bodies of 6 males, 3 females and 6 children have been discovered at the house where the blasts occurred last night.

Meanwhile, another woman and a child who were found injured in the incident have been hospitalized.

It is not known for certain if the persons who were killed in the safe house were members of a single family.

No injuries or casualties have been reported among the security forces personnel involved in the shootout, police confirmed.

Four bodies suspected to be that of the suicide bombers have been recovered at the site of last night’s explosions and gun battles at Sainthamarudu.

Police Spokesman Ruwan Gunasekara said that search operations are still underway at the locations of the blasts.

Shooting erupted between security forces and a group of armed men during a search and cordon operation related to the Easter Sunday attacks.

Army troops, together with Police personnel in the general area of Nintavur, Sainthamaruthu are now conducting clearing operations, having cordoned the entire area after the shoot out on Friday night.

Reports confirmed that the troops on intelligence tip-off given by the Police were proceeding towards to check a safe house of suspected terrorists when they triggered three explosions and began firing towards the troops.

Troops retaliated and raided the safe house where a large cache of explosives had been stored, the Sri Lanka Army said.

One civilian fell victim and died in the crossfire and 3 or 4 persons were reportedly injured. At the same time, two of those gunmen with one weapon, suspected to be from an Islamic terrorist organization, were killed during the retaliation, it said.

Reports had claimed that there could be one or more suicide bomber inside the safe house either killed or in hiding.

However, troops were unable to storm the place in the dark and due to heavy concentration of civilians’ houses around, according to Major General Aruna Jayasekara, Commander, Security Forces (East).

Following detection of two ID cards, initial reports confirmed the said van had been bought in Akkaraipattu on cash on 19 April.

At the moment, Army troops have cordoned the entire area and are conducting clearing operations with the support of sister services, Special Task Force (STF) and Policemen in affected areas.

Meanwhile, during another search operation carried out on Friday  in Samanthurai area, Army troops recovered ISIS flags, literature and some other objects from a place, said to be the terrorist organization’s place for oath-taking.

Those dead gunmen are yet to be identified and clearing operations are continuing.

A curfew was imposed within Kalmunai, Chavalakade and Samanthurai police areas last night until further notice.

46 Swords Under Moulvi’s Bed In Colombo

Earlier, on Friday, police arrested a man with 46 swords in the Slave Island area of Central Colombo. The arrest was made during a search operation, carried out by police commandos.

According to The Island daily, the swords were found hidden under the bed of the Moulavi of the Kadil Jumma Mosque near the Defence College, in Slave Island.

In addition to the swords, a suicide west without explosives was found in the same mosque.

Meanwhile, 20 camouflage military uniforms were recovered from another mosque in Kollupitiya, near Temple Trees , the official residence of the Sri Lankan Prime Minister, The Island daily reported.

A suspect had been taken into custody along with the stock of military uniforms, security sources said. The suspect, a student of a higher education institute at Malabe near Colombo, had told police that his father was involved in the garment industry and the stock of clothes were his products to be sold in the market.