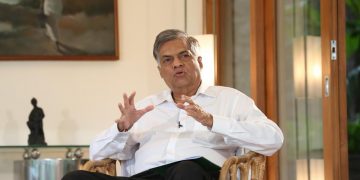 Colombo, September 7 (DailyFT): Sri Lankan Prime Minister Ranil Wickremesinghe told a group of senior United National Party (UNP) members on Friday that he would be the party’s candidate at the upcoming Presidential election. However, he agreed with the suggestion that he discuss it with his party rival Sajth Premadasa who has already declared himself as the party candidate and is campaigning.  The Presidential election is due between November and December 2019.

rA senior Minister, who was at the meeting, told Daily FT that Wickremesinghe had said he would put forward his name to the UNP’s Working Committee and leave the final decision to them.

“The Prime Minister said that the decision on who the party’s candidate would be will be decided in a democratic way by the Working Committee. This was the procedure that was adopted when Sarath Fonseka was picked to run on a UNP-backed ticket as well as when Maithripala Sirisena was picked to run in 2015,” the Minister said, speaking on condition of anonymity.

He said no date had been fixed for the Committee to meet but it should happen shortly.

At the meeting withe the PM, Ministers Kabir Hashim and Malik Samarawickrama cautioned the Prime Minister that his decision could lead to a split in the Party.

“Upon this, Wickremesinghe said that there would be no split because if his name is approved by the Working Committee, he would be the UNP candidate. Anyone who opposed this would have to run independently or with another Party if they wish to.”

Wickremesinghe was told that he could not reach out to the crucial rural vote in the country, but he had dismissed this saying that most of the programs undertaken by the UNP in the past four years had benefited people across the country.

“Rule of law, human rights, freedom of expression, all these were guaranteed by this Government and these will help him in the election,” the Minister said.

References were also made to the massive crowd that had gathered at Kurunegala to welcome UNP Deputy Leader Minister Sajith Premadasa, who had declared himself the Party’s candidate for the Presidential poll.

“If Ranil Wickremesinghe is declared the candidate, we can garner massive crowds too, but the candidature can’t be sized by a show of force.”

The UNP members present at the meeting had requested the Prime Minister to hold a one-on-one meeting with Premadasa and iron out differences before the Working Committee meeting so that the party’s campaign would be stronger.

“What we told him is that it is best that they work together so that the UNP can secure a victory. He agreed to that. They will hold a one-on-one meeting on Sunday (8 September) to discuss how they can work together for the betterment of the Party, he added.