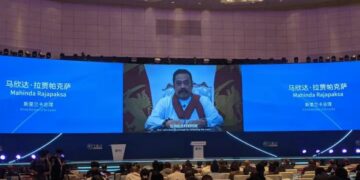 Lankan PM says his country will achieve carbon neutrality by 2050

Lankan PM says his country will achieve carbon neutrality by 2050 Prime Minister Mahinda Rajapaksa said: “ President Xi’s announcement last year of China’s commitment to cut emissions to net zero by 2060 has reactivated the global race to de-carbonize and reduce the negative impacts of climate change, and I commend the co-hosts for conducting this event at such a timely moment. The theme “Energy—Climate—Environment,” as selected for this year’s Forum, suitably focuses on three of the biggest challenges faced by countries around the world.”

“The net-zero emissions goal by the middle of the century is ambitious for any country. Emerging nations, in particular, are faced with the challenge of having to prioritize energy security while reducing carbon emissions. One of the SDG Goals addresses the need to achieve affordable and clean energy. Already, the Sri Lankan Government is making significant investments in transforming the country’s energy sector towards clean, low-carbon, renewable energy. Our goal is to generate 80 per cent of the country’s energy through hydro and renewable sources by 2030, and achieve carbon neutrality by 2050.

Despite global efforts to limit global warming, climate change is already affecting every part of the Earth. Although small island nations like Sri Lanka have contributed least to global climate change, those countries face the biggest damage. For example, the rising sea levels will challenge the very existence of coastal communities in island nations. Addressing such challenges will require massive investments and will place a heavy financial burden on those smaller countries.

“That is why I would like to call upon the international community to seriously consider equitable climate financing to compensate the large-scale damage that many smaller countries have already suffered. That damage includes the loss of human life and the destruction of their rich bio-diversity.” PM Mahinda Rajapaksa said.

“The urgent need now is to uphold the commitments we have made towards ‘net-zero’ emissions, and thereby protect our people and the environment. With such collective action, we will be able to achieve our targets of affordable, reliable and sustainable energy solutions as well as reduce the impact of climate change on our people.”

Chinese Premier Li Keqiang said that China has been improving ecological and environmental quality in recent years amid efforts towards pollution prevention, optimization of energy mix and industrial structure, and intensified moves to save energy and reduce emissions.

As the COVID-19 pandemic is still ravaging around the world, coupled with emerging variants of the virus, instability and uncertainty are rising in the global economy and bring grave challenges to green and sustainable development, Premier Li said. In this difficult time, all countries should work together closely to advance development while transitioning to a green future, the Premier said.

All countries, on the basis of mutual respect, should make all-out efforts to transform energy consumption structure and way of production in a scientific and orderly way. Global climate governance should be pushed forward based on nations’ historical responsibility and conditions. Given the discrepancy between developed and developing nations on historical responsibility for tackling climate change, development needs and capacity, multilateralism should be upheld, with the principle of common but different responsibilities, Premier Li stressed. He said that the concerns of developing nations should be high on the agenda, and support in technology, funds and capability should be ramped up to assist them in achieving green and low-carbon energy transition.

China, as the largest developing country, is on the road to accomplish socialist modernization by the middle of the century, and bring an affluent lifestyle to the Chinese people in low-carbon and green development. It is an undertaking unseen in human history, and requires arduous efforts, Premier Li said. With sound cross-cyclical adjustment of macro policies and faster moves to upgrade the industrial structure, China will strictly control sectors with high energy consumption and emissions, and develop environmental protection industries, to inject new vitality in the global recovery, Premier Li said.