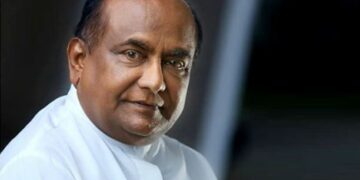 The HKSAR is an integral part of China and Western countries should not interfere in China’s internal affairs, Mahinda Yapa Abeywardana said in an exclusive interview to Xinhua.

China’s top legislature, the National People’s Congress (NPC), last week adopted a decision to improve the electoral system of the HKSAR, so as to remove the existing institutional deficiencies and risks and provide a sound institutional guarantee for fully and faithfully implementing the principles of “one country, two systems,” as well as “patriots administering Hong Kong.”

“Everyone should forget about their differences and stand by their own countries when it is needed,” Abeywardana said, adding that Sri Lanka would ask its people to do the same thing where national interests are concerned.

The Communist Party of China (CPC) has been successful in its development attempts and the HKSAR was a part of the CPC’s vision for the country, he said.

The Chinese government’s decision will be firmly implemented in the HKSAR, Abeywardana said.

“We salute you because you are standing by your own country. We would give all our support and assistance to China,” he said.

He said that Sri Lanka has adopted a neutral and non-aligned foreign policy, respects the sovereignty of other countries, and expects other countries to respect its own.

Abeywardena lauded China’s success in eradicating poverty. In a recent interview to Xinhua, Abeywardena, who has visited China several times since 1987, said that development under the Communist Party of China has been magnificent, especially in the rural areas.

“It’s amazing the development you see if you go inside the country,” he said.

Abeywardena said the “conviction, commitment and sacrifice” of the CPC is the secret behind China’s successes in the field of development. The example set by the CPC inspires the Chinese people to action, he said.

Since the founding of the People’s Republic of China in 1949, more than 800 million people have been lifted out of poverty, which represent over 70 percent of global poverty reduction. Notably, over the past eight years, the final 98.99 million impoverished rural residents living under the current poverty line have been lifted above it, according to the Chinese government.

Sri Lanka and China have long-standing bonds of friendship, the speaker said. He called for more dialogue with Chinese counterparts as well as more frequent visits to China by Sri Lankan policymakers in order to identify and learn from China’s development success.

The Sri Lanka-China development projects have been formulated on a win-win basis, Abeywardana said, adding that Port City Colombo, a flagship Belt and Road project, is the biggest investment in the country’s history and its land reclamation has expanded the country’s geography.

“I believe very soon there will be huge investment coming into Sri Lanka that will be a big economic boost,” he said.

Abeywardena said that Sri Lanka has shown impressive progress after emerging from a 30-year civil war. The government has worked hard to rehabilitate former fighters, and resettle internally displaced people, while the military has de-mined vast areas of former war zones, he said.

Under the leadership of the Sri Lankan government, war-affected areas are now major agricultural producers and supplied with basic infrastructure and resources, including housing, water and electricity, Abeywardena said.