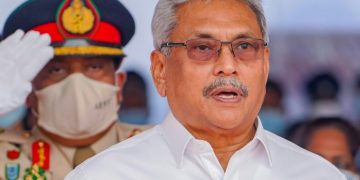 Colombo, October 22 (newsin.asia): The Sri Lankan parliament on Thursday passed the controversial 20th Amendment (20A) to the Constitution by 156 votes to 65, eight votes more than necessary to pass it with the required two-thirds majority.

The ruling Sri Lanka Podujana Peramuna (SLPP) had 148 MPs out of the total, current, House membership of 223.  One ruling party member, former President Maihripala Sirisena, had excused himself, bringing down the alliance’s strength to 148 from 149 (without including the Speaker).

The parliament’s sanctioned strength is 225 including the Speaker. But there are two vacant seats, those of the  UNP & OPPP (RathanaThero and Gnanasara Thero’s party). These two parties had not named their National List MPs. Therefore, with Speaker Mahinda Yapa Abeywardene, the total strength of parliament,  currently, is 223 MPs.

The Cassandras, who predicted defections from the ruling Sri Lanka Podujana Peramuna (SLPP) because of internal personal and ideological contradictions, were proved wrong.

The 20A replaces the 19 th.Amendment (19A). The 19A enacted in 2015 under the previous United National Party-led regime, had diluted the powers of the directly elected President very substantially and had given an enormous amount of power to Independent Commissions which had non-elected persons also. This had resulted in the crippling of the Executive to the extent of making it dysfunctional.

The 20A abolishes the independent Constitutional Council and replaces it with the Parliamentary Council and enhances the President’s executive powers in an unprecedented way.

As per the determination of the Supreme Court, the House made certain amendments to the draft bill to obviate the need to go for a referendum. Even the controversial clause to give electoral rights to Dual Citizens was passed. Though the Supreme Court had given the nod to Dual Citizens getting the right to stand for elections and hold elected offices, there was intense opposition to it from various quarters on grounds of national sovereignty and security.

In the determination on the 20th Constitution Amendment Bill, the Supreme Court had let the basic structure of the 20A bill remain unaffected while making a referendum necessary in the case of four relatively minor provisions.

The Court’s determination suited the government because its basic requirements had been met. And the government expressed its readiness to entertain amendments at the committee stage in Parliament. The court was satisfied with the assurances.

(The picture at the top shows President Gotabaya Rajapaksa, the main beneficiary of the 20th. Constitutional Amendment)