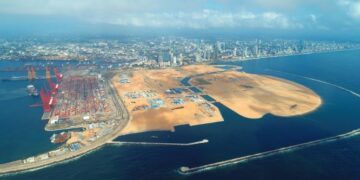 Colombo, March 29 (DailyFT): A Bill to provide for the establishment of the Colombo Port City (CPC) Special Economic Zone has been published in the Gazette and is slated to be presented to Parliament next month.

The 76-page Bill provides for the establishment of a Commission empowered to grant registrations, licences, authorisations, and other approvals to carry on businesses and other activities in the Special Economic Zone (SEZ) to be established within the Colombo Port City.

According to the Bill, the SEZ will be an international business and services hub with specialised infrastructure and other facilities for the promotion and facilitation of economic activity, including international trade, shipping logistic operations, offshore banking and financial services, information technology and business process outsourcing, corporate headquarters operations, regional distribution operations, tourism, and other ancillary services.

The objectives of the Commission will be to promote the CPC to be a leading Special Economic Zone in the region and an attractive investment destination to attract enhanced foreign direct investments into the country.

It will oversee the creation of a safe and conducive business environment and facilitate ease of doing business in and from the Area of Authority of the Colombo Port City and endeavour to ensure that the Ease of Doing Business Index in its area of authority is maintained at a level like other attractive economic zones in the region.

The Commission will consist of not less than five members and not more than seven members, and they will be appointed by the President, under whose purview the Colombo Port City functions.

The appointees will be drawn from among experts in the fields of investment, finance, law, information technology, engineering, business or accountancy. One member among them will be appointed as the Commission’s Chairperson.

The Commission, in consultation with and with the approval of the President, will appoint a suitable person as the Director-General of the Commission, who will function as its Chief Executive Officer.

The Commission will have its own fund with a sum of Rs. 400 million being the initial contribution payable by the project company to the fund of the Commission, on account of the Commission discharging inter alia the functions of the investment facilitator of the Colombo Port City.

The Bill, titled the ‘Colombo Port City Economic Commission Act’, is slated to be presented to Parliament next month.