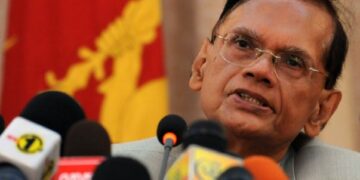 Colombo, September 16: The Sri Lankan Foreign Minister Prof. G.L. Peiris has said that though the Non-Aligned Movement (NAM) is not a factor in international relations as it was in the past, some of its principles do have immediacy and relevance now.

Speaking at the Ministerial Sessions on ‘Foreign Policy and Religion’ at the G20 Interfaith Forum held in Bologna, Italy, from September 12 to 14, Peiris said: “There is the widespread conviction that foreign policy decisions are often made without any regard to ethical or moral factors. It is a question of loyalty to a group to which one happens to belong and then uncritically one follows a course of action that is dictated by that group. There is no attempt to search one’s own conscience, decide what is wrong, what is right in a particular situation.”

“Now, the whole point of the Non-Aligned Movement was to look at each foreign policy issue on its merits. You don’t come to a priori conclusions and membership of a group, fidelity to a group, should not be regarded as something that overwrites and supersedes matters pertaining to one’s own conscience.”

“Of course, this movement began and flourished in a certain context, the context of a bipolar world. Today we live in a unipolar world. There are no longer two warring camps. But that does not mean that the ideology underpinning the Non-Aligned Movement is entirely irrelevant or obsolete. Not at all. I think if you look at the troubled world in which we live, some elements of that philosophy remain very relevant and they have a kind of immediacy today, which they probably did not have in the 1960s when the movement had its heyday.”

“So that is a point that I would like to stress to dispel this mood of skepticism and cynicism, to enshrine a state of things in which foreign policy decisions are made according to moral and ethical values. I think that’s an important point,” Peiris said.

Speaking on the skewed polices of international institutions, Peiris said: “Look at the Bretton Woods institutions. The Bretton Woods institutions were also fashioned in a certain political context that is the end of the Second World War but the world has changed a great deal since then. But those institutions remain largely as they were. Now the developing world in particular, if the World Bank, for example, were to agree to a policy of debt forgiveness in the excruciatingly difficult circumstances that we have today, then countries that are developing would be able to use their own scarce resources for projects connected with the welfare of their populations. Now take my own country Sri Lanka. We normally earn 4.2 billion dollars a year from tourism. That has come almost to a complete stop. Then our trade relations have been affected. Money coming into the Sri Lankan Treasury from the efforts of our expatriates working abroad in countries like Italy has been affected. So in that situation, if the World Bank were to agree to a policy of debt forgiveness, I think that would greatly accelerate and facilitate the economic development of our countries.”

Speaking about the inequality manifest in the UN Security Council, Peiris said: “Look at the composition of the Security Council. Does that in any way reflect the reality of the modern world? It does not. It reflects a certain balance of powers that was only realistic at the conclusion of the Second World War. But today there are other emerging powers. I won’t name countries but the entire organization needs to be basically overhauled to bring it in line with contemporary realities. The Economic and Social Council needs to be strengthened. Again, there has to be an emphasis on equality, on human dignity. The whole world, not a section of the world. It is not one section – affluent, powerful, dominating the rest of the world and using the United Nations system as an instrument for their domination. That is what creates a certain lack of confidence in the organs and the structures associated with the United Nations system. So I think these are some of the critical issues, imperative issues that we need to address at this time.”

“You can’t do it in an acrimonious, divided way. Many of our countries, certainly my own country, we have different parts of the population speaking different languages, professing different religions. Their cultural backgrounds are completely different. That’s a problem. Now, how do you work on that? I think the key to that, Mr. Chairman, is the educational system. You know, the young, impressionable minds, certainly in our part of the world, the Indian subcontinent- Sri Lanka, Malaysia, that part of the world- you have different ethnic communities in schools and universities being taught in completely different compartments, and there’s hardly any opportunity for young people toget to know each other. Not because there’s hostility. There’s no hostility at all. It’s just that they can’t speak to each other. There’s no communication possible because of the problem of language. So not only their academic lives but even their cultural and social lives tend to be entirely compartmentalized. Therefore, language plays a key role in communication, a link language for example.

Peiris said that ethnic and religious parties play a divisive role antithetical to national needs including a mature foreign policy.

“In many of our countries, we have political parties that profess overtly to be ethnic in character and complexion. We represent this ethnic group. We represent this religion. I don’t think that’s a good idea. It does a great deal of damage. In my own country Muslims, Tamils, members of minority communities have reached the pinnacle of political power and authority as members of the national political parties.  National Political Parties! And that has not inhibited their rise within the democratic system. So there is no need for them to detach themselves from the national polity, to segregate, to compartmentalize the national polity by the formation and the emergence of political groupings that seem sectarian. They have a very narrow perspective, and that is hugely detrimental to the solidarity and the unity of our countries,” the Lankan Minister said.