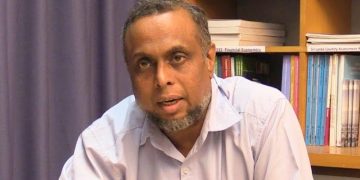 Colombo, June 25 (newsin.asia): The final report of the Expert’s Committee appointed to review the proposed Millennium Challenge Corporation Compact (MCC) was handed over to President Gotabaya Rajapaksa at the Presidential Secretariat on Thursday.

Later the report will be placed before the public, the Presidential Media Division said.

The Committee has presented its recommendations following a six months long study after careful consideration of opinions, views and suggestions from various sectors of the society including experts, voluntary organizations, public entities and individuals.

Two stages of the MCC had been signed in 2017 and 2018 said the Chairman of the Committee Lalithasiri Gunaruwan Professor of Economics of University of Colombo. Although USD 7.4 million and 2.6 million had been granted under the two stages, no accounts details are to be found anywhere, Prof. Gunaruwan said.

The Chairman pointed out that no multi-sectorial analysis had been conducted by the focal points of the then Government entrusted with the task of reviewing before the signing of the Compact.

Prof. Gunaruwan said that after the adoption of the project as an Act of Parliament it would be a violation of the agreement to submit a counter-proposal or a resolution relating to it.

Any condition of the Compact can be amended by two representatives by a letter. Such an action amounts to a violation of the sovereignty of Parliament. It had created a situation where the Attorney General cannot represent the Government or go to Courts, the Chairman said.

The members of the Committee enlightened the President on the current status of countries which had implemented the MCC. They said the fate of these countries is tragic.

The Chairman Prof. Lalithasiri Gunaruwan commended the opportunity given by the President to compile an unbiased report without intervention of any external party.

After considering all these facts the President directed the Secretary to the President to place the recommendations of the report before the public.

Following a Cabinet decision taken on December 18, 2019, the four-member Committee was appointed with effect from January 01st, 2020. Former Secretary to the Ministry of Transport Dr. D. S. Jayaweera, President’s Counsel Justice Nihal Jayawardena and architect Nalaka Jayaweera are the other members.

The interim report of the Committee was handed over to the President on February 17th.

(The picture at the top is that of Dr, Lalthasiri Gunaruwan)