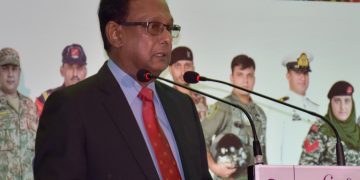 Colombo, September 6 (newsin.asia): Sri Lanka’s Defense Secretary, Gen. (Retd.) Shantha Kottegoda, lauded the help given by Pakistan to defeat terrorism in his country while speaking at a reception to mark the  54 th., Defence Day of Pakistan here on Thursday.

Gen.Kottegoda, who was the chief guest, said that Pakistan has been a true friend of Sri Lanka and recalled that Pakistan had rendered unconditional support to Sri Lanka for eliminating one of the most ruthless terrorist outfits in the world.

“The Government and people of Sri Lanka will never forget the moral and material support of Pakistan,” Kottegoda said.

In his remarks, High Commissioner of Pakistan, Maj. Gen. (Retd) Dr. Shahid Ahmad Hashmat, referred to the Kashmir dispute and said that it is an internationally recognized issue which needs to be resolved in accordance with the UNSC resolutions and aspirations of the Kashmiri people. He called for the invocation of the Right to Protect (R2P).

The Defense Advisor at the High Commission,Col. Sajjad Ali, said that Pakistan is one of the largest contributors to UN peacekeeping missions and added that the Pakistan Armed Forces are fully prepared to thwart any aggressive designs against his country.