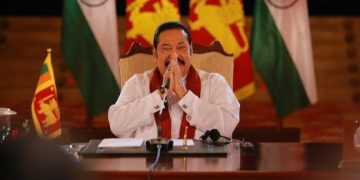 India and Sri Lanka have been engaged in various infrastructure projects which require review. Sri Lanka awaits India’s action in regard to requests for a debt moratorium and an additional currency swap. It was Prime Minister Rajapaksa’s first virtual bilateral summit, a format leaders around the world are starting to use since the outbreak of COVID-19.

While not as ideal as face-to-face interactions between leaders, technology is helping maintain and enhance foreign relations at a crucial time.

The summit is being held on the initiative of Prime Minister Modi who had a telephonic conversation with the newly-appointed Sri Lankan prime minister on August 6 this year.

Earlier, ahead of the summit the Indian external affairs ministry said in a statement : “ The summit will give the opportunity to two leaders to comprehensively review the broad framework of the bilateral relationship soon after Parliamentary polls in Sri Lanka and in context of time-tested friendly ties,”

The issue of fishing will be a key point in the bilateral talks between the two Prime Ministers, according to Indian officials.

Prime Minister Rajapaksa’s media unit on Saturday said that the prime minister held talks with a large contingent of local fishing organizations on Friday (25) and the issue between the two countries would be a major point of discussion.

Premier Rajapaksa’s office said that the fisher community told the premier that since the outbreak of COVID-19, the Indian authorities no longer prevent their fishermen straying into local waters for poaching. This has caused hardships for the local fishing community.

Fishing by Indians in the Sri Lankan waters has been a recurring problem and has figured at high-level talks between the two neighbours in the past.

Rajapaksa assured them that the issue would be taken up with the Indian leader and the Sri Lankan Navy should arrest anyone carrying out poaching in the country’s waters, it said.

The interaction between the two leaders is also expected to focus on the full gamut of bilateral engagement inter-alia political, economic, finance, development, defence and security spheres, educational, tourism and cultural as well as regional and international issues of mutual interest, the Sri Lankan foreign ministry said in a statement on Wednesday.

Relevant subject ministers and senior officials of both countries will associate the leaders at the summit.

The two leaders are expected to deliberate on a host of issues like ways to further deepen anti-terror cooperation, boost overall defense and trade ties as well as implementation of India’s development projects in Sri Lanka.

India and Sri Lanka have been engaged in various infrastructure projects required review. Sri Lanka awaits India’s action in regard to a debt moratorium and an additional currency swap.