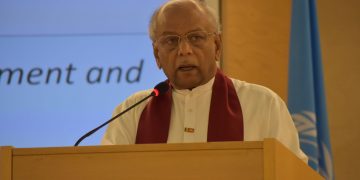 Lanka tells UNHRC it is withdrawing co-sponsorship of the 2015 resolution against it.

Lanka tells UNHRC it is withdrawing co-sponsorship of the 2015 resolution against it. Geneva, February 26 (newsin.asia): Sri Lanka’s Foreign Relations Minister Dinesh Gunawardena told the 43 rd.session of the UN Human Rights Council (UNHRC) here on Wednesday, that his country is withdrawing from the co-sponsorship of Resolution 30/1 of October 2015 on the grounds that the resolution is “impractical, unconstitutional and undeliverable.”

Minister Gunawardena said that the government has decided to withdraw its co-sponsorship of Resolution 40/1 of March 2019 entitled “Promoting reconciliation, accountability and human rights in Sri Lanka”, which also incorporates and builds on preceding Resolutions 30/1 of October 2015 and 34/1 of March 2017

“Resolution 30/1 of 2015 remains to date a blot on the sovereignty and dignity of Sri Lanka,” the Minister maintained. “The commitments made, bound the country to carry out this experiment, which was impractical, unconstitutional and undeliverable, despite strong opposition and evidence that many of the undertakings couldn’t be carried out, merely to please a few countries,” the Minister said.

Co-sponsorship was the handiwork of the previous United National Party (UNP) regime, led by Prime Minister Ranil Wickremesinghe. Resolution 30/1 of October 2015 pertains to the last phase of Sri Lanka’s war with the LTTE in which, the Lankan armed forces allegedly committed war crimes.

The minister went on to point out  that “in terms of reputational damage, the Resolutions had ‘eroded Sri Lankans’ trust in the international system and the credibility of Sri Lanka as a whole in the eyes of the international community.”

“This irresponsible action also damaged long nurtured regional relationships and Non-Aligned as well as South Asian solidarity. The deliberate polarization it sought to cause through trade-offs that resulted in Sri Lanka’s foreign policy being reduced to a ‘zero-sum game’, made my country a ‘pawn’ on the chess board of global politics, and unnecessarily drew Sri Lanka away from its traditional neutrality,” he argued.

He blamed Resolution 30/1 for weakening national security and added that it was the backdrop for the Easter Sunday terrorist attacks last year that killed over 300 people in the island nation.

“It is seen that the dictated changes in the country pursuant to 30/1, undermined the national interest and compromised national security, including weakening national intelligence operations and related safeguards, which are deemed to have contributed to the lapses that resulted in the Easter Sunday attacks in April 2019, which targeted churches and hotels, resulting in loss of life, including those of foreign nationals, which poses challenges to our government to restore national security,” the Lankan Foreign Minister maintained.

“In co-sponsoring resolution 30/1, the previous government violated all democratic principles of governance and declared support even before the draft text was presented,”  Gunawardena said.

Neither the parliament nor the then President of the country was consulted, he pointed out.

He explained that it was over a decade ago, on 18 May 2009, that Sri Lanka defeated terrorism militarily, bringing to an end three decades of conflict and suffering.

“The end of the brutal conflict advanced, secured and protected one of the fundamental human rights – the ‘right to life’ for all Sri Lankans- Sinhalese, Tamil, Muslims and others. I would like to state with pride that since May 2009, not a bullet has been fired in the name of separatist terrorism in Sri Lanka,” Gunawardena said.

“The government led by the then President Mahinda Rajapaksa, of which the current President Gotabaya Rajapaksa was the Secretary to the Ministry of Defense, initiated a sustainable reconciliation process in Sri Lanka to bring about ‘healing and peace building’, taking due cognizance of the ground realities at that time,” the Minister said.

By December 2014, the then  Mahinda Rajapaksa government, had made considerable progress in de-mining, resettlement, return of land used by the security forces; reduction of military presence in the former conflict areas; and rehabilitation and reintegration of ex- LTTE combatants including child soldiers, rapid infrastructure development, restoration of the right to franchise in the former conflict affected areas, and establishment of domestic mechanisms to address issues related to accountability, rule of law and human rights.

“Notwithstanding these inclusive and locally designed measures, undertaken carrying along the people of Sri Lanka, a group of UNHRC members, failing to appreciate the GoSL’s endeavors in defeating terrorism and bringing about stability, humanitarian relief and lasting peace through a carefully balanced reconciliation process, moved consecutive country-specific resolutions at the UNHRC on Sri Lanka in 2012, 2013 and 2014,” Gunawardena said.

With the election of President Gotabaya Rajapaksa by an overwhelming majority, the people of Sri Lanka have given a clear signal for their wish for a different path forward for the country, Gunawardena maintained.

He recalled the words of President Gotabaya Rajapaksa in his address at the 72nd Commemoration of Independence of Sri Lanka: “We will always defend the right of every Sri Lankan citizen to participate in the political and governance processes through his or her elected representatives”.

Gunawardena stated that according to the wishes of the people of Sri Lanka, while following a non-aligned, neutral foreign policy, his government is committed to examining issues afresh, to forge ahead with its agenda for ‘prosperity through security and development’, and to find home-grown solutions to overcome contemporary challenges in the best interest of all Sri Lankans.

“It is in this context that I wish to place on record, Sri Lanka’s decision to withdraw from co-sponsorship of Resolution 40/1 on ‘Promoting reconciliation, accountability and human rights in Sri Lanka’ which also incorporates and builds on preceding Resolutions 30/1 of October 2015 and 34/1 of March 2017,” Sri Lanka’s Foreign Relations Minister said.