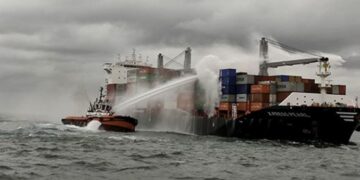 Colombo, May 26 (newsin.asia): Following instructions from Sri Lankan President Gotabaya Rajapaksa, the Marine Environment Protection Authority (MEPA), the security forces and other responsible government entities have launched a comprehensive operation to mitigate the damage to the marine environment and coastline by the MV X-Press Pearl vessel which caught fire and is in distress off the coast of Colombo.

The President has instructed the officials to pay special attention into minimizing the spread of oil around the vessel in the event of an oil spill while remaining vigilant about the prevailing adverse weather condition. The President also advised them to take into consideration the steps taken by other countries when managing similar disasters.

The Navy and other state institutions have already begun clearing debris off the coast.

Under the instructions of the President, the Marine Environment Protection Authority has already tested the water samples around the coastline. In addition, there had been discussions with the shipping company, insurance company and other respective parties over the future measures that need be taken in this regard.

The President commended the Navy, Air Force and other parties for their efforts in containing the fire and stressed the need to pay special attention to the preservation of the coastline.