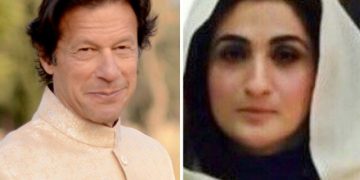 Lahore, February 20 (The Express Tribune): The Minister of Urban Development in the Pakistani province of Punjab, Syed Haroon Ahmed Sultan Bukhari, has said that parks in Lahore can be used for holding weddings including those of “serial grooms” who enter wedlock for the third or the fourth time.

Bukhari’s statement came in the context of a debate in the Punjab provincial assembly on the use to which parks in Lahore city are put.

In the debate, the treasury and opposition benches seemed more concerned about the marriages of Chief Minister Shehbaz Sharif and Pakistan Tehrik e- Insaf (PTI) party leader Imran Khan than about civic affairs. Both have had more than one marriage, with Imran recently scoring a hat trick when he married Bushra Maneka his spiritual guru. He was previously married to Jemima Goldsmith, a wealthy British lady, and Reham Khan, a Pakistani TV hostess.

Both the ruling PML-N and the opposition PTI went hammer and tongs at each other,  calling the leaders of the other party “serial grooms.”

Pandemonium broke out when Minister for Urban Development Syed Haroon Ahmed Sultan Bokhari, with a wry smile on his face, said he is generous in offering parks as venues for social functions, even allowing weddings of those people who are  marrying for the third or the fourth time.

Bukhari said there are 813 small and big parks in Lahore. The law does not allow the holding of marriages in them but they are being held. He said he is granting permission even to “serial grooms”, alluding to Imran Khan.

Stung by it pposition MPAs stood up said this was an irresponsible answer to a serious query. PTI’s Shaikh Khurram, named the wives of the Punjab Chief Minister Mian Shehbaz Sharif, said that Imran Khan had never forced a divorce.

Opposition leader Mian Mehmoodur Rasheed and other PTI legislators Dr Murad Rass, Nabila Hakim Ali Khan and others also reacted strongly to the minister’s answer saying that he was clearly targeting their party chief Imran Khan, who had recently entered wedlock for the   third time.