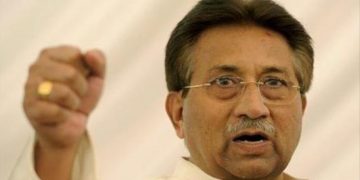 The meandering six-year trial of Gen.(Rtd) Pervez Musharraf, Pakistan’s former military dictator-turned civilian President, for “high treason” had pitted the judiciary against the army in that country. However, the Lahore High Court’s order of January 13, 2020, setting aside Musharraf’s conviction by a Special Court, prevented an immediate head-on clash between the two pillars of the State. A head-on confrontation will have destabilized Pakistan at a time when the country is experiencing relative stability and peace.

Right through the high treason trial, the judiciary was holding out bravely, even as it underwent splits in the process because an army take-over could not be ruled out when push came to shove.

Musharraf had been having trouble with the judiciary since 2007, six years after he seized power in a military coup on October 12, 1999. On March 9, 2007, he suspended Chief Justice Iftikhar Muhammad Chaudhry for the latter’s orders on several sensitive cases such as forced disappearances and selling State assets at throwaway prices.  But the suspension badly backfired. A massive lawyers’ movement resulted in Chaudhry’s reinstatement on July 20, 2007.

But the never-say-die President Musharraf went on to contest the Presidential election on October 6, 2007 even while being the Army chief also. Chief Justice Iftikhar Chaudhry, convened a seven-member bench which issued an interim order against Musharraf and also directed the armed forces not to obey illegal orders.

In retaliation, on, November 3, 2007,  Musharraf declared a State of Emergency and unseated 61 judges of the higher judiciary including Chaudhry. On November 29, 2007, Musharraf appointed himself a “civilian” President after resigning from the post of Army Chief.

However, on December 15, 2007, Musharraf lifted the Emergency, and revived the 1973 constitution which, in the meanwhile, had been amended through Presidential decrees validating all his actions during the Emergency.

But by 2008, Musharraf had again fallen out with the judiciary and the population at large for various reasons including the assassination of Benazir Bhutto on December 27, 2007. On August 18, 2008, Musharraf resigned from the Presidency to avoid impeachment by parliament.

On July 31, 2009, the Supreme Court (SC) ruled that Musharraf’s decision to impose a State of Emergency on November 3, 2007 as well as his Provisional Constitutional Order were illegal and unconstitutional. The SC gave Musharraf a week to respond. But Musharraf fled to the UK without responding to SC’s demand.

On March 24, 2013, the self-exiled Musharraf returned to Pakistan to contest the general elections. But his old bête noir, Nawaz Sharif, who he had overthrown in 1999, was in power and he re-opened the high treason case. On June 24, 2013, Sharif told the National Assembly that his government will ask the Supreme Court to try Musharraf under Article 6 of the Constitution.

Art 6 of the 1973 constitution had clearly said that any person who abrogates or subverts or suspends or holds in abeyance, or attempts or conspire to abrogate or subvert or suspend or hold in abeyance, the constitution by use of force or show of force or by any other unconstitutional means, shall be guilty of “high treason”. Any person aiding or abetting (or collaborating) in these actions shall likewise be guilty of high treason. Furthermore, any action of high treason shall not be validated by any court including the Supreme Court and a High Court, Art 6 added.

On November 18, 2013, the SC under Chief Justice Iftikhar Chaudhry, agreed to set up a Special Court to try Musharraf for high treason. On December 12, 2013: the Special Court summoned Musharraf to face treason charges. But on January 2, 2014, Musharraf was moved to a hospital. The Armed Forces Institute of Cardiology certified that the former army chief was suffering from “triple-vessel coronary artery disease and eight other diseases.”

However, on February 7, 2014,  the Special Court ordered Musharraf to appear before it. This time, the defense pleaded that being an army man, he should be tried by a military court. But the Special Court negatives the plea.  Alarmed at the treatment meted out to a fellow army officer by a civilian court,  Army chief Gen. Raheel Sharif, declared on April 7, 2014, that the army will “preserve its own dignity and institutional pride” in response to “the concerns of soldiers on undue criticism of the institution (army) in recent days”.

However, on March 16, 2016, the Supreme Court removed the travel ban on Musharraf to enable him to go abroad for treatment because he  promised to come back from in weeks. But he never returned. On May 11, 2016, the Special court declared Musharraf an “absconder”.

By 2018 cracks began to appear in the judiciary. On March 29, 2018, the Special Court bench was dissolved after Justice Yahya Afridi recused himself. Though the court was reconstituted, on July 30, 2018, the head of the prosecution team quit.

But on April 1, 2019, the SC under Chief Justice A.S.Khosa issued a decree asking the Special Court to proceed in the case without Musharraf’s statement if he fails to appear the following month. But on July 30, 2019, the head of the Prosecution quit stalling the trial. On October 24, 2019 the pro-army Pakistan Tehreek-e-Insaf (PTI) government led by Imran Khan, sacked the prosecution team.

On November 27, 2019, the Islamabad High Court stopped the Special Court from announcing the verdict on the case. Nevertheless, on December 17, 2019, the Special Court sentenced Musharraf to death in absentia for high treason. The court directed the law enforcers to apprehend Musharraf (receiving medical treatment in Dubai) and ensure that the death sentence was carried out. But if he was found dead, “his corpse (should) be dragged to D-Chowk, Islamabad, Pakistan, and be hanged for three days”, the Special Court ruled.

Predictably, the Pakistan army said in a tweet that the sentence was received with “a lot of pain and anguish by rank and file of Pakistan armed forces”. It highlighted Musharraf’s’ contribution to Pakistan as a soldier for 43 years and complained that he had not received a fair trial.

But in a remarkable turnaround, on January 13, 2020, the Lahore High Court (LHC) declared the formation of the Special Court to be “unconstitutional”. By saying so, the LHC nullified the entire trial process:  the filing of the complaint;  the appointment of a prosecution team; the trial in absentia, and the conclusion of the trial with a death sentence being awarded.

When Emergency was declared on November 3, 2007 and the constitution was held in abeyance, the punishment for holding the constitution in abeyance was not death penalty because the offence was not considered “high treason” at that time. The LHC said that Musharraf could not be punished now for something that was not punishable in 2007.

The High Court also said that Article 6 does not apply to the 2007 Emergency because Article 232 had given power to the President to declare an Emergency under special circumstances. The LHC further said that cabinet’s approval had not been obtained for the formation of the Special Court.