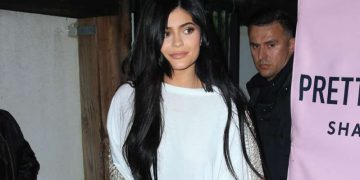 by Editor
in Around The World, Entertainment, Lifestyle, World
Reading Time: 2min read
2 0 December 18 (Bang Showbiz) – Kylie Jenner has been named the highest-earning celebrity of 2020.

The ‘Keeping Up With the Kardashians’ star has reportedly raked in $590 million this year, largely thanks to selling 51% of her cosmetics company to Coty earlier this year, according to data compiled by Forbes magazine.

Kylie was the only woman to feature in the top 10, with her brother-in-law Kanye West in second place.

However, the earnings of the ‘Stronger’ hitmaker – whose wife, Kylie’s half-sister Kim Kardashian West, ranked 48th with $49.5 million – were considerably lower than the 23-year-old star, having brought in $170 million in 2020, largely thanks to his Adidas deal.

In sixth spot was actor-and-director Tyler Perry – who has used his vast fortune to pay for groceries and meals for those in need, as well as funeral and other expenses for the families of George Floyd, Rayshard Brooks and Secoria Turner this year – with earnings of $97 million, while another soccer player, Neymar, saw his $95.5 million earnings land him seventh place.

DJ Howard Stern was eighth with $90 million, one place ahead of LeBron James with $88.2 million.

Elsewhere on the list, Travis Scott, the father of Kylie’s two-year-old daughter Stormi, appeared at number 82 with 2020 earnings of $39.5 million.

Notable showbiz names in the top 20 included 12th-placed Ellen DeGeneres with $84 million, Ariana Grande at 17 with $72 million, Ryan Reynolds at 18 with $71.5 million and the Jonas Brothers, whose $68.5 million earnings awarded them the 20th spot.

Forbes’ latest list comes months after Kylie made the financial bible’s annual World Billionaires list for the second year in a row.