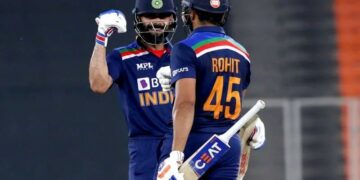 It was only the eighth time in 84 innings that Kohli opened batting, but what worked against the world’s top-ranked team should succeed in the format’s showcase tournament as well, said the 32-year-old.

“I am going to open in the IPL as well,” Kohli, who leads Royal Challengers Bangalore in the Indian Premier League, said at the presentation ceremony after India clinched the decider by 36 runs.

“I’ve batted at different positions in the past, but I feel we have a very solid middle order, and now it’s about your two best players getting the maximum number of balls in T20 cricket.

“So I would definitely like to partner Rohit at the top.”

“If we have a partnership and we both are set, then you know that one of us is going to cause some serious damage. That’s exactly what we want.”

It also would allow India’s middle-order batsmen to play with much more freedom, said Kohli, who made 80 not out and was adjudged player of the series.

“It augurs well for the team and I would like this to continue, and hopefully continue that form through to the World Cup.”

Former England captain Michael Vaughan felt the Kohli-Rohit combination could be as effective as the prolific Indian opening pair of Sachin Tendulkar and Virender Sehwag in the past.

“Can’t be a better opening combo on the eye than @imVkohli & @ImRo45! Could easily match @virendersehwag & @sachin_rt if they stick with this combo,” tweeted Vaughan.