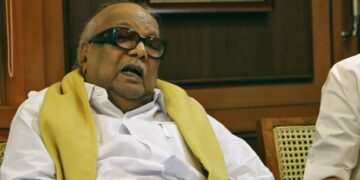 Muthuvel Karunanidhi’s decision to support the Liberation Tigers of Tamil Eelam (LTTE) to the hilt when he was Chief Minister of Tamil Nadu between January 1989 and January 1991 had several adverse and wide-ranging consequences. The Dravida Munnetra Kazhagam (DMK) government, which he headed, was sacked citing collusion with the LTTE, when it had completed only two years of its five year term.

Peaceful Tamil Nadu had become the scene of assassinations. And the cause of the Sri Lankan Tamils, which Karunanidhi claimed to uphold as the Tamizh Ina Thalaivar (Leader of the Tamil Race), suffered a huge setback.

It was during that time that the Tigers’ war against the Indian Peace Keeping Force (IPKF) in North and East Sri Lanka was at its height and the violence and lawlessness across the Palk Strait had spilled over to peaceful Tamil Nadu.   The leeway given to the LTTE by the DMK regime enabled the militant group to massacre the leadership of the rival Lankan Tamil group, the Eelam Peoples’ Revolutionary Liberation Front (EPRLF), in Madras on June 19, 1990.

The government’s indulgence paved for the assassination of former Prime Minister Rajiv Gandhi in the State on May 21, 1991. The man who led the squad which massacred the EPRLF leadership, the one-eyed Sivararsan, was to mastermind the assassination of Rajiv Gandhi. The Tamil Nadu police had allowed Sivarasan and his squad to escape to Sri Lanka in 1990 in defiance of orders from Delhi to catch them. Sivarasan would came back to plot the killing of Rajiv Gandhi.

Rajendran was Chief Secretary in the TN government when Karunanidhi was Chief Minister. Rajendran says that the Central Indian intelligence agencies were constantly complaining to the Tamil Nadu government about the LTTE’s activities but to no avail. The agencies therefore took up the matter with the then Prime Minister V.P.Singh. Despite being a political ally of Karunanidhi’s, Singh conveyed his displeasure to him. But this too had no effect because Karunanidhi was convinced that if he had to be the “Leader of the Tamil race” he had to support the Tigers. Rajendran’s suggestions to be tough on the Tigers fell on deaf ears.

However, undaunted, Rajendran continued to ask the then Director General of Police (DGP) to take action against the LTTE. Strangely, Rajendran does not mention the DGP’s name which was P.Dorai. He refers to him only as “DGP”. The DGP gave shortage of men and inadequate fire power as excuses for inaction. Significantly he did not ask for enhancement of facilities. There were clear indications that a section of the police was hand in glove with the Tigers with the government’s and the political leadership’s tacit consent.

As feared, at a checkpoint on a road between Ramanathapuram and Mandapam, LTTE cadres brazenly shot dead two policemen who had tried to stop their vehicle. Rajendran ordered the DGP to nab the culprits, expecting him to avenge the killing of fellow policemen. But there was little or no action. The killers were allowed to go to Madurai smoothly and check into the posh Pandyan Hotel. When told about this lapse, the Chief Minister was nonchalant. So were the DGP and the Home Secretary (R.Nagarajan).

On June 19, 1990 the day EPRLF leader Padmanabha and 12 of his colleagues were massacred in Kodambakkam, a heavily populated area in Madras, Karunandhi and Rajendran were in Delhi for a meeting with Prime Minister V.P.Singh. Such an assassination in Tamil Nadu was new and was clearly too much for Karunanidhi. He spoke to Singh in private and came out saying that the PM desired stern action.

Rajendran immediately called the DGP and ordered a manhunt. But when he came to Madras the next morning and met the top brass, including the Home Secretary (Nagarajan) he found that no action had been taken. He told them that some militants were holed up in a house near the State police HQ and ordered a pre-dawn swoop. But the next day he was told that the inmates had scooted.

“Two things became clear from this episode, namely, the DGP was not feeding me with full information and secondly no explanation was forthcoming as to how they could have escaped when the police were  maintaining road blocks on all the roads,” Rajendran writes.

Earlier, in March 1990, when the IPKF was returning to Madras at the end of their mission in Sri Lanka, the Indian navy had invited Karunanidhi to a function at the harbor to welcome the soldiers. Although Prime Minister V.P.Singh had requested Karunanidhi to attend the reception, he boycotted it saying that the IPKF was a “Indian Peace Killing Force” (having killed Sri Lankan Tamils in the fight against the LTTE).

Singh was not at all pleased with Karunanidhi’s stance, but did not give in to the demand of the opposition Congress party and the All India Anna Dravida Kazhagam (AIDMK) led by Jayalalitha to sack his government.

However, there was a sea change when Singh lost power in November 1990  to Chandrashekhar, who was supported by Congress. With the anti-LTTE Subramanian Swamy as a minister in his cabinet, Chandrashekhar firmly told Karunanidhi that the LTTE’s activities should be curbed effectively. He even threatened to set the Navy and the Coast Guard against the LTTE and demanded that the Tamil Nadu government cooperate. Karunanidhi agreed but sought permission to allow  medicines to be ferried on humanitarian grounds. The Prime Minister reluctantly agreed, Rajendran recalls.

On returning to Madras, Karunanidhi instructed  the DGP to tighten measures against the LTTE on the lines suggested by the PM. But a few  days later it  came to Rajendran’s notice that the Prime Minister had  expressed unhappiness that the instructions given to the CM in a closed door meeting had been leaked to the LTTE. Chandrashekhar suspected the Tamil Nadu government’s complicity in this.In January 1991, Chandrashekhar felt constrained to dismiss the DMK government on the grounds that it was not maintaining confidentiality.

Prior to his dismissal, Karunanidhi had lost confidence in Rajendran. Perhaps the Chief Secretary’s consistent efforts to get the police to contain the LTTE did not endear him to Karunanidhi. Rajendran was sent off to be Chairman of the Tamil Nadu Electricity Board. However,  Rajendran managed to get transferred to the Central government. Later he became Governor of Odisha.

The DGP (P.Dorai) was in a soup as he was suspected to have scotched proceedings against the killers of the leaders of the EPRLF. When Home Secretary R.Nagarajan was arrested allegedly for instructing the police to go easy on the Tigers, DGP Dorai feared that Nagarajan would squeal and that he too would be arrested. In December 1991, Dorai died under mysterious circumstances. Though a Christian, his body was cremated and no post mortem was done according to India Today. Home Secretary R.Nagarajan was eventually acquitted for lack of evidence.