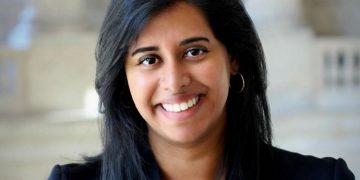 “She is not only an expert on some of the most important issues facing the American people, but also one of my closest and most trusted aides from the Senate and presidential campaign,” Harris said releasing her list of advisors.

Before that, she was a Spring 2020 resident fellow at the Institute of Politics at the Kennedy School of Government at Harvard University.

Kosoglu has a dedicated career in public service and was the first South Asian American woman to serve as Chief of Staff in the United States Senate. She served as Vice-President Elect Harris’ Chief of Staff for her Senate office and later for her presidential campaign.

Before that, she was Policy Director for US senator Michael Bennet of Colorado, where she oversaw economic, health care and budget issues. She has negotiated several bipartisan bills into law and served as a senior health care advisor during the drafting and passage of the Affordable Care Act.

She also previously served as a legislative aide to US senator Debbie Stabenow of Michigan. Originally from New Jersey, Kosoglu is a graduate of the University of Michigan and George Washington University and is a mother to three young children.

Harris further said that her Chief of Staff will be Tina Flournoy. On Flournoy she said   that her “deep experience, public policy expertise, and accomplished career in public service make her uniquely qualified for this important position.”

“Tina brings a strong commitment to serving the American people and her leadership will be critical as we work to overcome the unprecedented challenges facing our nation,” she said.

Appointing as her National Security Advisor Ambassador Nancy McEldowney, Harris said that her “distinguished Foreign Service career and leadership abroad will be invaluable as we keep the American people safe and advance our country”s interests around the world.”

McEldowney served for over 30 years in the US Foreign Service, including as US Ambassador to Bulgaria and as Chargé d’Affaires and Deputy Chief of Mission in Turkey and Azerbaijan.

Canada-based Sri Lankan journalist DBS Jeyaraj has the following to say about Rohini Kosoglu’s Sri Lankan roots in his blog:-

Rohini Lakshmi Ravindran was born in New Jersey the “Garden state” of the US in 1984 and raised there. She is known among family members and Sri Lankan friends as Lakshmi. Both her parents are Sri Lankan Tamils with Jaffna roots. Her father’s family hails from Thirunelvely known as Thinnavely and Urumpirai. Her mother’s family is from Navaly and Sandilipay.The parents migrated to the US in the early eighties before the July 1983 anti-Tamil pogrom. Her father arrived first followed by her mother.

Rohini’s father Wijeyadevendram Ravindran is a medical doctor who has been a practicing emergency room physician for the past 38 years at the Community Medical Center in Tom River, New Jersey. Her mother Shobana Ravindran nee Mylvaganam is a homemaker though possessing tertiary qualifications including a master’s degree in accounting from Rutgers University in New Jersey. Rohini’s maternal grandfather Mylvaganam was a well-known surgeon in Colombo and Kandy while paternal grandfather Wijeyadevendram was a Government servant in Colombo and retired as Director of the Cottage and Rural Industries Department.

Ravindran was a pacey who opened bowling as well as first change. He batted at six down. Ravindran was a stonewaller who usually remained unbeaten with nifty double-digit knocks below fifty. The Thomians lost the big match in 1969 to Royal led by Eardley Lieversz. The be-spectacled Ravindran scored a pair of specs in that match. Ravi squirms even now when friends remind him of this.

Rohini’s mother Shobana was an old girl of Holy Family Convent in Bambalapitiya and Kandy Girls High School in the hill capital.

While on the topic of Cricket, it is noteworthy that another of Rohini’s close relatives – a medical doctor- played cricket for Ceylon as Sri Lanka was known earlier. This was Dr. C. Balakrishnan, her mother’s cousin and an old boy of St.John’s College, Jaffna. Incidently Rohini’s maternal uncle Ajantha Mylvaganam -an Accountant – is married to Charmaine Imbuldeniya the daughter of a former Police DIG. Her father’s brother Harichandran – an Architect- is married to Bhawani the only daughter of former left-leaning Mayor of Colombo Thillainathan Rudra after whom the Rudra Mawatta and Rudra Ark in Wellawatte are named. Bhawani’s five brothers Thilak, Jeya, Hari, Ravi and Shri are all old Thomians.

Some of Lakshmi Rohini’s relatives have engaged in “ Tamil nationalist politics” too. Her paternal grandmother’s siblings are the “Famous Boston Brothers” who campaigned actively to promote the “Eelam Tamil” cause some years ago. The Thillaiambalam brothers comprising Sripathe, Sritharan and Srikanthan were based in Boston, Massachusetts and known as the Boston Brothers, Jeyaraj says.