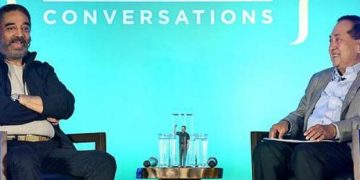 Chennai, January 10 (The Hindu): In yet another sign of his willingness to work with colleague and friend Rajinikanth in politics, actor-politician Kamal Haasan on Thursday said he wanted the latter to help Tamil Nadu.

To a question by N. Ram, Chairman, The Hindu Group of Publications, on the fraternity shared by the two actors at a recent event, Mr. Haasan said he would try to convince his friend Mr. Rajinikanth.

“He is proudly a Tamilian now… I want him to invest in Tamil Nadu. That’s what I’ll try to convince him [to do]. He is of that mindset,” he said at a conversation organised on Thursday by Algebra – The Arts and Ideas Club.

Mr. Haasan said he almost stepped into politics when he made Hey Ram. He said the signs he saw at that time about the country reaching the political situation it is in today prompted him to make that movie.

“Today, making that film will be difficult,” he said. On how the country went to the present phase of divisive politics, he said democracy was not infallible and constant vigil was needed to keep it healthy.

Criticising Tamil Nadu for being one of the most corrupt States, he said the corrupt system could not be changed without seizing power.

Sudheendra Kulkarni, socio-political activist, who was formerly with BJP, spoke on the need to overthrow the present BJP regime, in a separate conversation with Mr. Ram during the event.

He said there was a sinister attempt now to consolidate the Hindu vote bank and make India a Hindu Rashtra in the long run.

Mr. Kulkarni said there was a move to mould the BJP on the vision of V.D. Savarkar, which was different from that of M.S. Golwalkar and Deendayal Upadhyaya.

He said there was a need to make a section of the legacy of BJP and RSS as an ally in the fight against the present extremist version of Hindutva. “There is a need to engage the Hindus who voted for Mr. Modi. The [political] left must also change its strategy in engaging them,” he said.

He said that even in these ‘dark times’ there were some very good things happening as part of the opposition to the Citizenship (Amendment) Act. He said the country was seeing students coming out in large numbers, which even surpassed the magnitude witnessed during the Emergency period. “There is also a display of Hindu-Muslim unity that has not been witnessed in a long time,” he said.