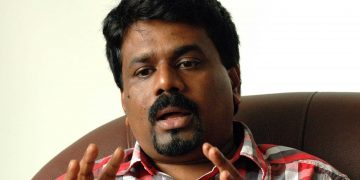 Colombo, September 6:  The National People’s Power (NPP) Presidential candidate and the Janatha Vimukthi Peramuna (JVP) leader, Anura Kumara Dissanayaka, in a recent interview with the Tamil daily Virakesari made some thought provoking comments about viable choices before the Tamil people of the Northern and Eastern Provinces in the upcoming Presidential election.

Dissanayaka has acknowledged that there is no question about the Tamil people of the two provinces casting their votes to Tamil parties in any election other than a Presidential election. But in a Presidential election, they have no option but to choose the candidate of one of the Southern Sinhala-based political parties. And when it comes to making a choice from among Southern political parties, his party, the NPP, could be an ideal choice.

Dissanayaka said that it is imperative to take the legitimate aspirations and genuine grievances of the Tamil people to the attention of the people of the South. This, he has underscored, needs to be done in a proper way, without which there cannot be a solution to the ethnic question.

While being candid in his admission that the JVP’s approach and activities had failed miserably in winning over the hearts and minds of the Tamil people of North and East, Dissanayaka has insisted the JVP will never give up hope of working among the Tamils of the North and East and winning them over.

If Dissanayaka genuinely believes that his party, or rather the NPP, will be the Southern political choice for the Tamil people in the December presidential poll, and if he sincerely regrets his party’s failure to win over the Tamil people, he should accept that the fundamental reasons lie in his party’s policies with regard to the Tamil problem.

There needs to be serious introspection on the part of JVP leader and his comrades at this point of time. JVP leaders have constantly been talking about the necessity for change in post-war thinking and have proudly declared they have embraced a new thinking.  Unfortunately, they have never ventured to analyze what the JVP as a political force had done towards bringing about an attitudinal change in the South,  especially with regard to a political settlement that would effectively address the legitimate aspirations and genuine grievances of  people belonging to the minority communities.

More than half a century of Sri Lanka’s political history shows that  the JVP’s stance on the ethnic problem has always run counter to the political aspirations of the Tamil speaking people. Despite claims to being Marxist, it has failed to address the political problems of the minorities. Bluntly put, the JVP has never supported any of the attempts made by previous governments to find a political solution to the ethnic imbroglio.

The party was not in existence when the Banda – Chelva Pact was signed in 1956.When the Sri Lanka Freedom Party (SLFP)  and the mainstream left parties organized a protest march in Colombo against 1966 Dudley – Chelva Pact, JVP’s founder leader Rohana Wijeweera  who was then a prominent leader of the youth wing of the Peking wing of the Communist party led by N. Shanmugathasan, participated in it despite the decision of the party not to take part in that vociferously communal campaign.

During the early part of 1980s, when the United National Party (UNP) government under President J. R. Jayawardene introduced thee District Council system, the JVP vehemently opposed it and campaigned against it among the people of the South.

When the  Indo – Sri Lanka Accord was signed between Prime Minister  Rajiv Gandhi and President Jayawardene,  in July 1987,  the JVP, though an underground  at that time,  plunged the country into bloody chaos and intensified its virulent campaign against the so-called Indian expansionism.

The party also rejected the Provincial Councils system introduced by way of the 13 Amendment to the Constitution in the wake of the Indo-Lanka Accord, describing it as a step towards partition of the country.

During the first year of President Premadasa’s rule, the second rebellion of the JVP was mercilessly crushed and Southern Sri Lanka witnessed the most ruthless State repression. Wijeweera and his close associates were captured and later killed. Subsequently, after almost five years of political hibernation, the JVP returned to democratic politics in 1994, and during President Chandrika Kumaratunga’s period, the party contested all elections including Provincial Councils elections.

Lest one forgets, the party was also in the forefront of the communal agitation in the South against the Norwegian facilitated peace process initiated by Prime Minister Ranil Wickramasighe’s administration 2002-2004.

At one stage the party went to the extent of forming an  alliance with the government led by President Kumaratunga, and leading members of the party accepted ministerial portfolios. Later, it left the government protesting against the negotiations initiated to device a mechanism for the rehabilitation and resettlement of those affected by 2004 tsunami in the North and the East with the participation of  the Liberation Tigers of Tamil Ealam (LTTE).

In the 2005 Presidential election, the JVP supported Mahinda Rajapaksa who contested on an anti – peace process platform. Though the party took no part in the government of Rajapaksa, it wholeheartedly supported the full-scale war waged by him.

After a short-lived union with Rajapaksa, the JVP joined forces with the movement fighting the misrule of Rajapaksa and his brothers, and subsequently went on to support the candidates of the common opposition in two consequent Presidential elections in 2010 and 2015. It gave critical support to the National Unity Government led by President Sirisena and Prime Minister Wickramasinghe in the initial stages and later, unhappy with the government’s policies and activities, began to strongly criticize it.

Even though the JVP was supportive of the constitution making process, it didn’t put forward any tangible proposals that would address the key issues in the protracted national question. Its leaders merely talked of other aspects of the constitutional reforms such as abolition of Executive Presidency and electoral reforms, completely ignoring the severity of the problem that paved the way for the 30 -year bloody war.

This brief history of the JVP drives home the point that inherently the party has never supported any attempt to find a political solution to the national problem and has never identified itself with the progressive forces that were supportive of the legitimate aspirations of the minorities.

Instead, the JVP had always been inclined to identify itself with all the campaigns directed against attempts to find an amicable settlement.

The history of the JVP has left a strong and lingering impression among the Tamil people, so much so, that when it comes to their political rights, there is no basic difference between the JVP and the other Southern political parties.

Dissanayaka, who argues in the interview, that when thinking of casting their votes in the upcoming presidential election, Tamil people of the Northern and Eastern provinces must differentiate between the JVP and the other parties of the South, must show the Tamil people, not only that the JVP’s policies regarding have changed, and but that he and his colleagues are also different in their thinking from the former leaders of the party. Only then can he think of winning over the people of the North and East and expect them to make their Presidential choice accordingly.