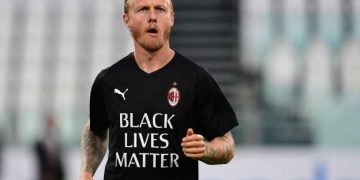 June 13 (Evening Standard) – AC Milan and Juventus joined together to take a stand against racism by wearing customised shirts before their Coppa Italia semi-final second-leg tie on Friday evening.

The Serie A clubs each warmed up in tops displaying anti-racism messages and support for the Black Lives Matter movement.

Star names such as Cristiano Ronaldo and Paulo Dybala were seen wearing Juventus’ training shirts that had ‘NO RACISM’ emblazoned on the back in block capitals.

Milan’s offering was a plain black jersey with a ‘Black Lives Matter’ message placed below the club’s crest.

A spate of racist incidents have taken place in Italian football this season, with Romelu Lukaku and Mario Balotelli among the players targeted for abuse.

In Italy’s first contest since the coronavirus pandemic halted the season on March 9, Juventus progressed to the Coppa Italia Final with a goalless draw against 10-man Milan.

Ronaldo missed an early penalty after a controversial handball before Ante Rebic was sent off just a few seconds later for a wild high boot on Juventus full-back Danilo.

But it mattered little as Maurizio Sarri’s side progressed on away goals having earned a 1-1 first-leg draw at the San Siro back in February.

They will face either Napoli or Inter Milan in the competition showpiece, with those two teams contesting their semi-final, second-leg clash on Saturday.

Napoli hold a narrow 1-0 advantage heading into that match.