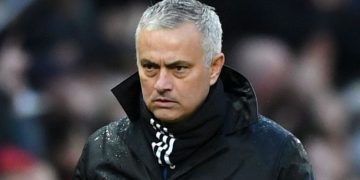 Feb 15 (The Guardian) – Manchester United made a payoff of almost £20m to José Mourinho and his staff, the club’s half-yearly accounts have revealed.

Mourinho was sacked in December after 17 league games in his third season, with a contract due to expire at the end of the 2019-20 campaign. Figures released on Thursday list a sum of £19.6m as “an exceptional item relating to compensation to the former manager and certain members of the coaching staff for loss of office”.

The goalkeeping coach Silvino Louro, the scout Ricardo Formosinho, the analyst Giovanni Cerra and the fitness coaches Stefano Rapetti and Carlos Lalín are expected to have received payments, though it is likely most of the money went to Mourinho, who was earning £15m a year at Old Trafford.

Mourinho has said he is not finished with club management though, having agreed to host a fortnightly Champions League show on the Russian RT television channel, he may be content to spend the rest of this season as a broadcaster.

Ole Gunnar Solskjær’s success in reviving the club’s fortunes, in the Premier League at least, casts an unflattering light on Mourinho’s time at United and the size of his payoff, though the United board was fully aware that, having granted the manager a one-year contract extension in January 2018, it would not be able to remove him cheaply. Very little at United has come cheaply in recent seasons, with the club’s spending on players in the two and a half seasons since Louis van Gaal departed standing at an enormous £364m.

While that figure puts Mourinho’s payoff into perspective, what is galling for the club and its supporters is that there has been so little return on the outlay. United were not on course to qualify for the Champions League when Mourinho was dismissed and, though Solskjær has greatly improved the atmosphere and outlook around Old Trafford, another last-16 exit from Europe looks likely after the side’s shortcomings were exposed by Paris Saint-Germain in Tuesday’s 2-0 defeat.

Based on what was seen in the first leg at Old Trafford, the caretaker manager and his players do not appear capable of overturning that deficit in the second, making it all the more important that United remain in their present top-four spot until the end of the season.

The clamour for Solskjær to be given the job full time has died down a little after his first defeat, with a gulf evident between United’s standards and those of a leading European side equally used to throwing money around, though a top-four finish would still represent a significant achievement for a club that was losing its way under Mourinho.

While Solskjær may still be overlooked for the permanent job even if he manages to secure Champions League football for next season, at the moment he is doing his old club a favour and his managerial CV no harm.

Further details in the United report showed the club’s broadcasting revenue for the second quarter increased by £28.5m (38%) compared with the previous year while their total operating expenses rose by £24.1m (17.7%) to £160.3m. United posted record revenues of £208.6m for the quarter, which translate into earnings before interest, tax, depreciation and amortisation (EBITDA) of £104.3m and an operating profit of £44m.